Cross posted from Scaling Green. Note that our local rag, the Washington Post, was prominent in this one, just as they were prominent in ginning faux hysteria over Ebola. And then there’s the 60 Minutes debacle. And don’t even get us started on the Faux “News” fossil fuel and right-wing propaganda network. 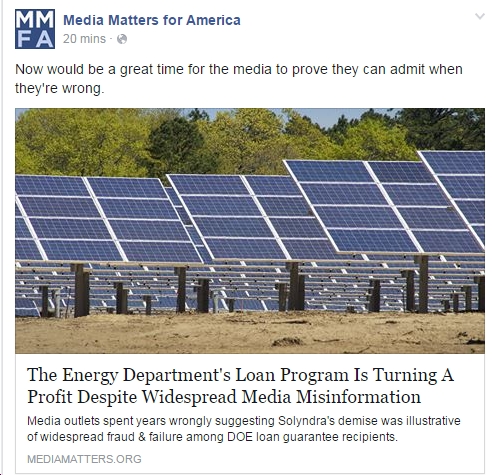 How can any of us forget the breathless media coverage over the supposedly failed Department of Energy renewable energy loan program and the non-scandal “Solyndra scandal?” For instance, Media Matters reminds us:

The media’s coverage of the DOE’s loan program over the past few years has been overwhelmingly negative and often egregiously misinformed. Coverage frequently focused on Solyndra, a solar panel manufacturer that received a $535 million federal loan guarantee before going bankrupt in 2011, suggesting the company’s fate was representative of the program’s success as a whole.

The Washington Post gave particularly outsized coverage to the Solyndra bankruptcy, devoting an entire section of its website to the so-called “Solyndra Scandal.”…

At CBS News, then-correspondent Sharyl Attkisson issued a report on Solyndra that was rife with factual errors. The report helped earn Attkisson an award from Accuracy In Media, a conservative organization known for pushing anti-gay misinformation and bizarre conspiracy theories. CBS subsequently pulled Attkisson from a planned appearance at the Conservative Political Action Conference (CPAC) to accept the award.

Fox News demonized DOE loan programs at every turn, criticizing even companies who received no funds at all from the guarantee program.

Well, now it turns out that all of this was not just slightly erroneous, but wildly false. In fact, it turns out that DOE has “loaned $34.2 billion to a variety of businesses, under a program designed to speed up development of clean-energy technology,” while collecting enough in interest payments to offset the miniscule (2.28 percent) default rate, leaving the program with an overall surplus to taxpayers of $30 million.  Which means that the DOE loan program basically helped jump start the U.S. cleantech industry (e.g., Media Matters points to “DOE’s role in the success of the electric car company Tesla Motors,” which actually “has a higher success rate than venture capitalists”) at a net profit to taxpayers.

Yet, despite this huge success story, in much of the media all we’ve heard has been “scandal,” “failure,” “picking winners and losers,” and other nonsensical, fossil fuel industry talking points.  Now that the media’s entire narrative has unraveled, the question is, to quote Media Matters,  whether “after years of breathless negative coverage…these media outlets will provide a more prominent a platform to inform media consumers of evidence that counters their previous narrative?” Personally, I’m not holding my breath.

UPDATE: Actually, make that a $5-$6 billion profit off the DOE loan program over the next 20-25 years.