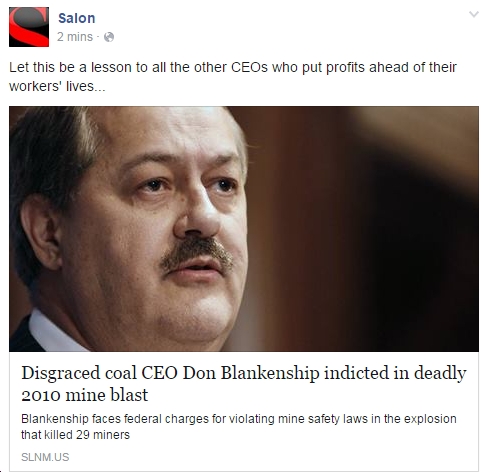 …the executives of pretty much every other fossil fuel company? Are they really any better than Blankenship, when their companies’ products (oil, coal, fracked gas, etc.) have been definitively proven to cause: “acid rain, which damages crops, forests, and soils, and acidifies lakes and streams;” “ground level ozone, or smog, which can burn lung tissue, exacerbate asthma, and make people more susceptible to chronic respiratory diseases;” particulate matter, which “can cause chronic bronchitis, aggravated asthma, and premature death;” release of harmful substances like mercury, “a toxic heavy metal that causes brain damage and heart problems;” “SO2 pollution, which takes a major toll on public health, including by contributing to the formation of small acidic particulates that can penetrate into human lungs and be absorbed by the bloodstream;” etc.

So who’s held responsible for all this? Where are all the other Don Blankenships who need to be indicted?