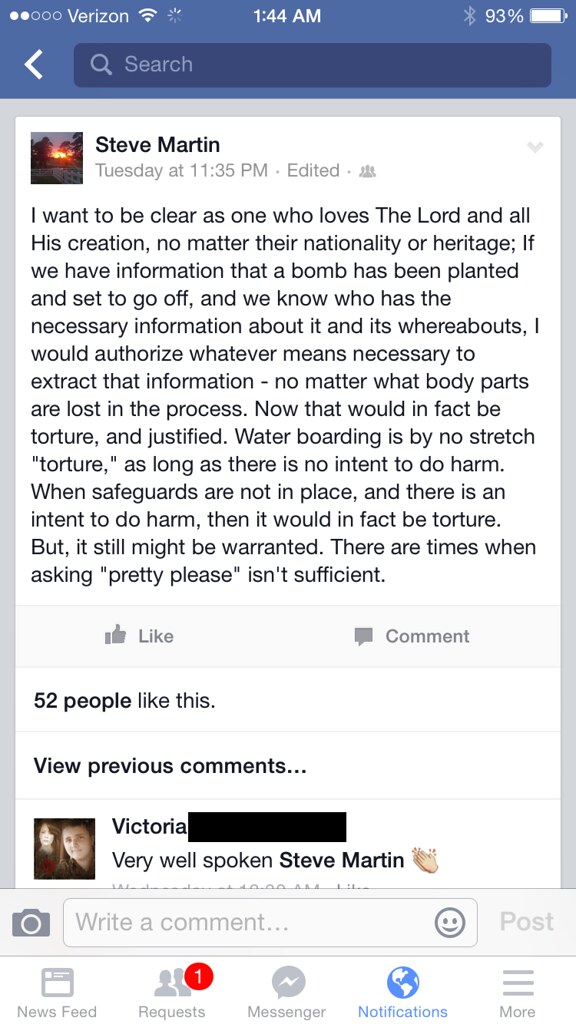 Just keep in mind when reading the following that this same guy, Virginia State Senator Steve Martin (R-of course!), is the same guy who referred to pregnant women as a “child’s host” (“some refer to them as mothers”), and who said that the majority of Americans who support a woman’s right to choose are “really sick people.” Also interesting is how Martin uses his religion to justify whatever extreme views he holds, even if nothing whatsoever in said religion conforms to those views (e.g., where in the Gospels does Jesus preach that torture is justified? where in the Gospels does Jesus preach that abortion is murder? uhhhh.).  Anyway, no matter how you look at it, this is some seriously warped, demented s***, unworthy of any American (or human being), let alone a State Senator. Ugh.

Steve Martin Beth: First, I’ve not acknowledged or represented interrogation techniques which are not intended to cause physical harm as being “torture.” The techniques others keep raising as used by the Japanese, Vietnamese, etc. were intended to cause physical harm without concern for it causing death. The techniques being discussed as part of the US CIA arsenal do not fit that description. As a matter of fact, our special forces go through it and more in training because we know it will not cause them physical harm. I’m not prepared to quote chapter and verse on this, but as you know there are scriptures speaking to loving your neighbors as ourselves, coming to their defense at our own expense, defense of a country and its people, etc.. Do you believe Christ would have us know that 3000 innocent people were about to be killed by a particular person and not do what was within our means to prevent it? What if preventing it involved shooting the person who was about to push a detonation button? If so, why would shooting him be okay but not making him think for a few moments that he might drown? What about the issue of shooting someone who has been shooting at you and those in your home? Even if we were in fact taking the threat’s life (we’re not, not even putting it at risk) it would be no different than ending the life that is threatening ours. An argument to the contrary would make sense only if you believe that you are never to defend yourself, your family, neighbors, or nation.

P.S. Note that if you go Martin’s Facebook page, you’ll find a lot of support for his position on torture. For instance, one person writes, “Gonads in a vice? I have no problem with that…..whatever it takes to protect/save loved ones.” And another fine fan of Martin’s writes, “On board to water board and more if that’s what it takes ( and apparently it does )… urghhhhh. Idiots. .. ” It’s also fun, in a weird kind of way, watching Martin tie himself into logical knots attempting to explain why it’s ok to give the government, which he generally seems to believe is evil and should have very limited powers, the power to torture and even kill people, even if it’s illegal (which it is), immoral (which it is), unChristian (which it is), etc. With that, check out the screen shot of what Martin posted, and also the following comment he left in the discussion thread.

P.P.S. Martin also claims in another Facebook thread that “those among the 31% [of Americans who oppose the CIA’s methods] should not be operating heavy equipment or have access to scissors.”

Virginia COVID-19 Cases Up 140,576 Over the Past 10 Days…Has the Omicron Wave Finally Started to Recede?