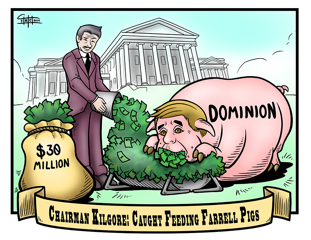 The following political cartoon, sent to us by a talented artist, refers to this story on “Dominion’s Strange Tobacco Money.”

Dominion Resources, the powerful, Richmond-based utility with $13 billion in revenues, has strangely been getting $30 million public funds to bring a natural gas pipeline to a new generating plant in Brunswick County.

Odder still (or maybe not so) the public funds are coming from the GOP-controlled Virginia Tobacco Indemnification and Community Revitalization Commission which has figured in a wave of corruption since it was formed in 1999.

Even more bizarre, the tobacco commission made up of politically-appointed people arranged for Dominion to receive millions more than its own staff recommended, according to an intriguing report by the Associated Press.

Keep in mind, as the AP story points out, that “Dominion is without peer in terms of political sway in Virginia and routinely gets friendly legislation passed with broad bipartisan support.” Not coincidentally, Dominion “is the single biggest donor to state-level politicians, as well as one of the biggest gift givers – often treating lawmakers to Washington Redskins games or paying for them to attend events like the Masters golf tournament in Georgia.”> Oh, and “CEO Thomas Farrell II and McDonnell are childhood friends.”

Also worth noting is that Farrell – pictured in the political cartoon – received $10.9 million in compensation in 2013, while his company earned $545 million in the third quarter of 2014 alone. Does this sound like a company that needs any taxpayer-funded corporate welfare at all, let alone $30 million?!? In this case, the money came from the Virginia Tobacco Commission, headed up by that fine, upstanding public servant, Del Terry Kilgore – the same guy who offered Phil Puckett a job on his commission if he’d quit the State Senate and throw it to Republican control. Charming, eh?

Of course, this is the same company which has spent millions of dollars over the years to purchase our legislature, and with it the right to control Virginia’s energy policy. Keep in mind that this is a regulated utility with massive amounts of business before the state. The fact that they’re allowed to basically purchase the people charged with regulating them should be unacceptable to Virginians of all political persuasions. Also, just curious, but why is Bob McDonnell going to jail for 10 years regarding Star Scientific, when Dominion Power and its bought-and-paid-for legislators (e.g., Terry Kilgore) have been doing that sort of thing for much, much longer – and on a far, far larger scale?

P.S. As a reader points out, see this article about Tom Farrell essentially buying his son a seat in the state legislature, and also this article about how “Farrell and his father, Dominion CEO Thomas Farrell, made a movie last year about VMI cadets in the Civil War. The project got $800,000 in tax credits and, laughably, a $200,000 grant.” More taxpayer-funded welfare for the wealthy. Perhaps the Tea Party should be protesting crap like THIS for a change?!?

Rep. Elaine Luria (D-VA02)’s Campaign Announces Updated Debate/Forum Schedule ("A forum hosted by the League of Women Voters on October 7th, which will continue without Scott Taylor.") https://bluevirginia.us/2020/09/rep-elaine-luria-d-va02s-campaign-announces-updated-debate-forum-schedule via @bluevirginia