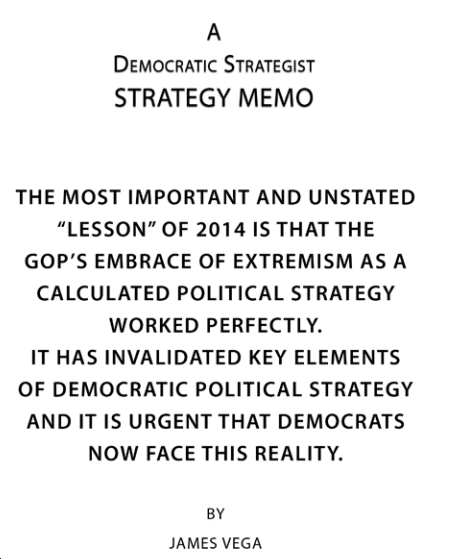 On Thursday, ACDC Chair Kip Malinosky forwarded me this memo by “The Democratic Strategist” on what Democrats should learn from the 2014 election. Here are the key points, which I strongly endorse.

I’d just add a few points. First, Andy Schmookler has written insistently, here and elsewhere, about the rise of a radical, extremist force in U.S. politics — the Tea Party of course, but more broadly the Republican Party, exemplified as it is by ignorance, fear, greed, intolerance, anger, and other “lesser angels of our nature.” The question is, what do we do about it? Clearly, the first step is to call it out for what it is. The second step is for Democrats, Independents and moderate Republicans to turn out at the polls to reject it.

Second, many of us have called out the media for their brain-dead, cowardly “both sides” false equivalence “reporting,” but one thing by now is clear: the media is FAR more intimidated, even terrified, of the right wing than of the progressive center (or the “left,” such as it is) in this country. Why do I call it the “progressive center,” by the way? Because, on issue after issue, progressives are in the (large) majority. I challenge you to find one major issue where progressives are NOT in the majority, whether it be huge majority support for clean energy and climate action; 92 percent of gun owners support universal background checks; Majority support SCOTUS gay marriage decision; 7-in-10 Americans Support Goals of Obama’s Immigration Action; 56%-36% advantage for the pro-choice side in the abortion debate; 32%-50% unfavorable view of the Tea Party; only 32% of Americans want “Obamacare” repealed (“Fifty-six percent favor keeping Obamacare with perhaps ‘small modifications,’ while 10 percent would leave it as is.”), etc.

Third, here in Virginia, we just had an example (by the Mark Warner for Senate campaign) about how NOT to get the Democratic “base” excited to vote. Recipe: a) “dis” the base at every turn; b) even use the phrase “Democrat Party” just to demonstrate how much contempt you hold us in; c) constantly prattle on, falsely, about how it’s “Washington” or “Congress” that’s “broken,” how “both sides” have to “compromise,” blah blah blah, instead of calling out the Republicans/Tea Partiers for their almost 100% responsibility for said problems; d) cozy up to extremist forces like the NRA, anti-environmental forces like the coal and oil industry, etc.; and e) spend a huge amount of your time campaigning in deep-“red” Virginia (formerly known as “Warner Country”), instead of focusing on the urban/suburban “crescent,” where most Democratic votes come from.

Finally, of course, Democrats need to give people strong reasons to vote FOR them, not just against the extremist Republicans. Sure, the latter should be reason enough in theory, but in practice it isn’t. Regardless, Democrats need to stand for something, and it’s basically what Elizabeth Warren (and Jim Webb, with the egregious and utterly unacceptable exception of the environment) have been talking about: social justice, economic fairness, fighting for working people as opposed to coddling the wealthiest 1% or even 0.1%, for criminal justice reform, for voting rights, for civil liberties, for “equal pay for equal work,” for science, for the environment, for “protecting Social Security, Medicare and pensions.”

Have Democrats been doing that? Put it this way: how much of that kind of talk did you hear in Virginia in 2014 from Mark Warner? John Foust? Uhhhh. Did you hear it from Mary Landrieu (about to lose by a landslide) or the other conservadems who also lost badly? Uhhhh. Can we all please not repeat that same mistake yet AGAIN in future elections?