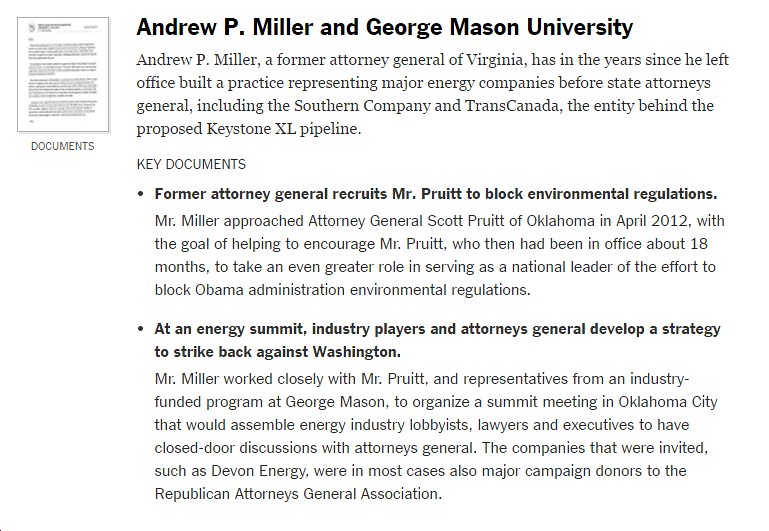 Believe it or not, the same Virginia Attorney General, Andrew P. Miller (D-ixiecrat), who filed suit agains the Voting Rights Act back in 1973, is still going strong (at 82 years old, no less). That is, if by “strong” we mean “slimy,” “awful,” “corrupt,” “working to destroy the environment,” “selling whatever soul he has for money,” etc. (note: Miller also sprung into action last year in defense of Ken Cuccinelli regarding Star Scientific; and earlier this year to the defense of Bob McDonnell). For more details on this blatant attempt by the fossil fuel industry to purchase our government in order to free them up to continue trashing the environment with impunity, check out the blockbuster New York Times story, “A Window Into a Secret Alliance: Attorneys General and the Energy Industry.” Here are a few highlights, focused on Virginia. As you read through this, also ask yourself WTF is the deal with George Mason University, which as the NY Times article points out is a “state institution?” How can they get away with this crap? Are all our state legislators asleep at the switch or what?

*”Andrew P. Miller, a former attorney general of Virginia, has in the years since he left office built a practice representing major energy companies before state attorneys general, including Southern Company and TransCanada, the entity behind the proposed Keystone XL pipeline. The New York Times collected emails Mr. Miller sent to attorneys general in several states.”

*”Mr. Miller approached Attorney General Scott Pruitt of Oklahoma in April 2012, with the goal of helping to encourage Mr. Pruitt, who then had been in office about 18 months, to take an even greater role in serving as a national leader of the effort to block Obama administration environmental regulations.”

*”Mr. Miller worked closely with Mr. Pruitt, and representatives from an industry-funded program at George Mason, to organize a summit meeting in Oklahoma City that would assemble energy industry lobbyists, lawyers and executives to have closed-door discussions with attorneys general. The companies that were invited, such as Devon Energy, were in most cases also major campaign donors to the Republican Attorneys General Association.”

*Click here for a PDF file of emails, etc., illustrating how Miller, “the lawyer and lobbyist for the coal industry,” went about fighting environmental legislation on behalf of his fossil fuel clients, “behind closed doors.” It’s truly appalling, nauseating stuff which makes a mockery of any concept that this is government of/by/for the people.

*A few more documents that give a feel for this slimy effort include:

“Resist Federal ‘Overreach’ Whenever It Occurs” (Miller claims, with no apparent self awareness or irony, that “sound public policy dictates that fracking be the subject of state not federal regulation,” and warns that there could be “all hell to pay” with regard to fracking if Barack Obama was reelected); “Creating a ‘Strike Force’ to ‘Challenge E.P.A.’s Overreach’ and Excluding Liberals” (among other things, Miller rants about NOT allowing “pro-industry speakers” to be “offset by Sierra Club acolytes”); “Setting up Meetings for George Mason University” (see below for some of GMU’s fossil fuel funders); “$10,000 From Devon Energy” (“The companies that are invited to participate in the summit meeting, such as Devon Energy, also in many cases became financial supporters of George Mason University”); “Keystone XL Pipeline” (“Mr. Miller tried to set up private meetings for at least some of his clients” leading up to the GMU-run “Fossil Fuels Summit” on January 16-17, 2013; Miller noted that a VP at TransCanada, the company pushing for the Keystone XL tar sands pipeline, will be “joining us”); “Summit on Federalism and the Future of Fossil Fuels” (the agenda for this event epitomizes crony capitalism, legalized corruption, money in politics, etc.); “Environmental Federalism Alliance” (“As soon as the summit meeting ended, various parties moved to capitalize on it, with Mr. Butler from George Mason University trying to raise more than $1 million from energy industry corporations to create a new entity called the Environmental Federalism Alliance, which would ‘coordinate state A.G. reviews of perceived overreach.'”); “Environmental Punch List” (“Here is an early tally of the major environmental regulations that the Federalism in Environmental Policy group identified to monitor and, if necessary, to intervene to attempt to block. It is a comprehensive list of most major environmental efforts by the Obama administration that were going on. Many of these proposed regulations have, in fact, already been challenged in court or through regulatory comments by these states or by industry groups.”); “Miller Keeps Up His Efforts” (Miller pushes “to revamp how the National Association of Attorneys General is operated, to give Republicans more power in helping to run the group,” while GMU “continues its push to serve as an energy industry platform, inviting Karl Moor, a senior executive at the Southern Company, to speak at one of its events, and soliciting a donation from the Southern Company, these emails from October 2013 through early 2014 show.”); “University Courts Energy Industry Officials” (“Mr. Butler from George Mason University has aggressively continued to court major energy industry officials, seeking money from them, and offering them a platform though the Virginia university to promote their views. Here are a series of his emails to various industry players, obtained via an open records request to George Mason, which is a state institution.” Appalling, should be investigated.); “The Indictment on Carbon War Crimes” (seriously, this is not a joke); “George Mason University Law and Economics Center Donors” (includes the American Petroleum Institute, Chevron, ConocoPhillips, ExxonMobil, Shell Oil, and the US Chamber of Commerce).

Bottom line: to paraphrase a friend of mine, this is just sickening — aren’t attorneys general supposed to represent the people, not the corporations (let alone a bunch of polluters)? To the contrary, what this NY Times investigation uncovers is nothing less than the wholesale purchase of our democracy, a form of legalized corruption that should disturb every American, no matter what your political party happens to be.