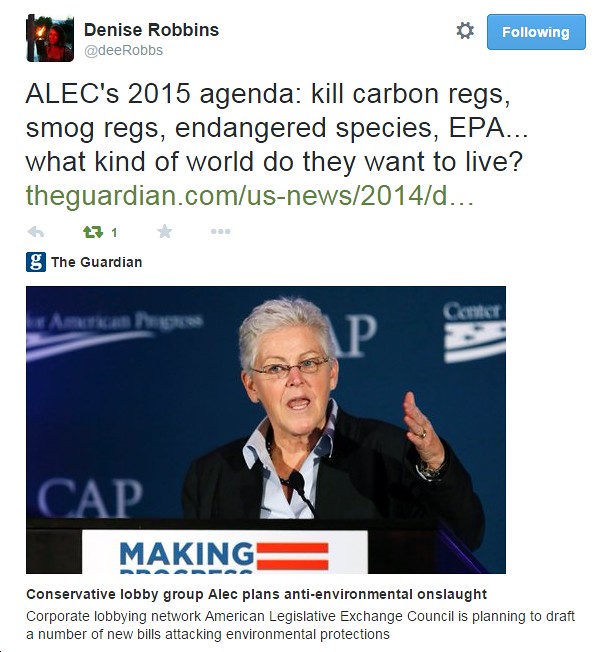 Disgusting, but not surprising from this heinous organization.

The corporate lobbying network American Legislative Exchange Council, commonly known as Alec, is planning a new onslaught on a number of environmental protections next year when Republicans take control of Congress and a number of state legislatures.

The battle lines of Alec’s newest attack on environmental and climate measures will be formally unveiled on Wednesday, when the group begins three days of meetings in Washington DC.

Despite the setbacks, Alec remains focused on pushing back government regulation and blocking efforts to fight climate change in 2015, according to documents posted on its website in preparation for Wednesday’s gathering.

On the agenda for its environment and energy task force are draft model bills that will seek to disband the Environmental Protection Agency (EPA), expand offshore oil drilling, and weaken environmental protections for smog and other air pollutants, as well as roll back protections for endangered species.

The top priority appears to be rolling back the main pillar of Obama’s climate action plan: new rules to limit carbon pollution from power plants now being rolled out by the EPA.

Seriously, if fighting to roll back endangered species protections and trash the planet aren’t evil, then what is? Oh, and keep in mind that Virginia House Speaker Bill Howell is on the ALEC Board of Directors, and that Domnion Virginia Power is a member (shocker, huh?). So, if you’re a member of an evil organization, what does that make you exactly? Gee, let me ponder that one…