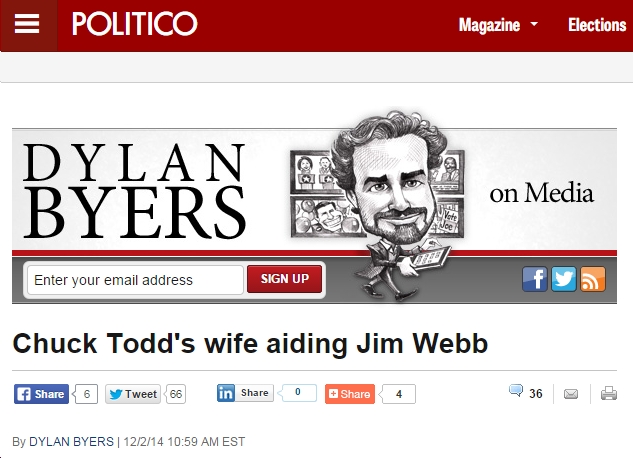 So lame and sexist by Politico, but not surprising. From what I’m told, when this rag launched, “the only woman on their masthead was the gossip columnist…not exactly a bastion of women in leadership.” As another political friend of mine put it a few minutes ago, “Chuck’s relationship w/ her is a nice detail, but nothing worth more than passing mention Unless we’re saying that people are their spouses.” I mean, what next, a headline on Politico about Chuck Todd’s “little Mrs.” or something? What are we, back in the 1950s or something?

Full disclosure: I worked with Kristian on the Webb campaign (she was Communications Director, I was Netroots Coordinator), like her and think she does good work. As for that guy…whatshisname…oh yeah, Kristian Denny’s husband Chuck Todd, I can’t say I’m a huge fan of his. But guess what, message to Politico – Kristian and Chuck are married but they’re not the same person. Difficult concept, apparently, for some folks.

P.S. It IS interesting that Kristian’s working for Webb again, along with former Webb for Senate campaign manager Jessica Vanden Berg. Putting the band back together?

Let's hope former Rep. @BarbaraComstock (R-VA10) is right about this. "Mainstream" certainly doesn't seem to be the case, though, with Amy Coney Barrett, Neil Gorsuch and Brett Kavanaugh. https://bluevirginia.us/2020/11/friday-news-a-thanksgiving-marked-by-surging-covid-19-cases-and-questions-about-a-leading-vaccine-candidate-diaperdon-mini-desk-tiny-hands-small-soul-the-rotting-of-the-republican-mi#comment-5168567393