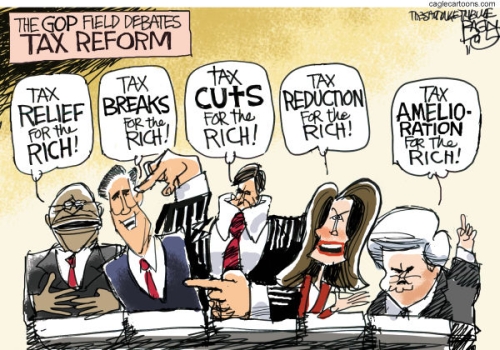 Former Lt. Governor Bill Bolling has taken to the GOP establishment’s paper of record to make the case for “pro-growth” tax reform. Remember, tax cuts as an economic agenda is never about making life easier for the rich and affluent in Virginia. It’s never about boosting profits for businesses. It is in no way a selfish, cynical policy proposal. It’s a serious idea (TM) to promote growth, because we cannot talk about other ways of encouraging growth (investing in education, expanding middle class incomes, or anything else that acknowledges government’s role in sustaining economic growth).

The question then becomes, what do we do with this additional money?

Some of it could be used to help support existing programs that are under extreme budget pressure, such as K-12 and higher education, but the primary focus should be on providing tax relief in areas that would help support economic development and enable working families to keep more of their hard-earned money.

Don’t reform taxes to invest in government services. Reform taxes so we can cut taxes elsewhere. The list that Bolling provides mentions almost every tax in Virginia, from the corporate income tax to the BPOL tax to the individual income tax. It’s far from a specific policy proposal, ironic given that Bolling also talks about how challenging tax reform can be because politicians aren’t courageous enough to work for ideas that can create winners and losers.

Last year the Thomas Jefferson Institute for Public Policy put out an idea to increase the state sales tax by expanding the goods and services covered, while cutting local taxes that Virginia’s business community has long complained about. Expanding the sales tax to cover services is not necessarily a Democratic or Republican idea, DC recently adopted this as part of the so-called “yoga tax.”

Expanding the sales tax base not only could offset the elimination of various local business taxes, even when excluding health care services from the sales tax there’s additional revenue left over that can be used to cut other taxes. I prefer a bottom-up approach to tax cuts, focusing first on expanding deductions, making Virginia’s earned income credit refundable, and eliminating lower income tax brackets. But raising state taxes in order to eliminate local taxes should remind Virginians of the Jim Gilmore car tax elimination, which ended up being fatally flawed. The Commonwealth Institute points this out:

The “Personal Property Tax Relief Act” of 1998 sought to eliminate the locally imposed car tax, but the cost of reimbursing the local car tax was such a drain on state revenues that the General Assembly was never able to give 100 percent reimbursement and had to cap it at just 70 percent in 2002. Then, beginning in 2006, reimbursements were frozen at $950 million and distributed based on each locality’s 2005 reimbursement.

If the Commonwealth were to fall short on reimbursing localities for the local business taxes, it would lead to higher property taxes at the local level. Or an even greater squeeze in local spending, including education.

Not all localities have local business taxes like the BPOL tax, the counties that do are more in the Eastern portion of the state.  The Virginia Republican Party may find a difficult balancing act in advocating for state reimbursement to these Eastern counties given that it will do little for rural Southwest and Southside Virginia where they have become so strong. BPOL is a suburban tax, especially within the metropolitan Richmond area. Ironically, the fact that the BPOL tax is so common in the urban crescent makes it a more appealing issue for Democrats if they want to court local businesses.

Will Nonpartisan Redistricting Ever Happen?

Can Any Virginia Republicans Stand Cuccinelli?

House of Delegates Passes Virginia Budget for 2021 and 2022 ("House Budget invests in Virginians Today and Tomorrow") https://bluevirginia.us/2020/02/house-of-delegates-passes-virginia-budget-for-2021-and-2022 via @bluevirginia