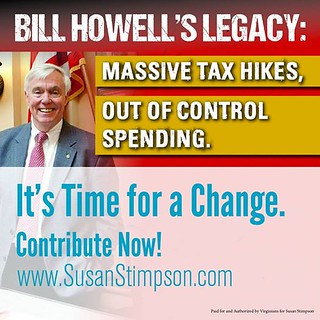 Instead of making predictions for 2015 (still not pushing my luck from the mostly accurate predictions I made for 2012, I’m simply going to list a dozen things to keep an eye on next year in Virginia politics. Please feel free to add your own items in the comments section. Thanks.

1. Arlington County Board elections: Following the two victories in 2014 (in a special election last spring and in the November general election) by Republican/faux-“Independent” John Vihstadt over Democrat Alan Howze for Arlington County Board, who knows what 2015 will bring, with two sitting board members – Democrats Walter Tejada and Mary Hynes – up for reelection. That is, assuming Tejada and/or Hynes decide to run for reelection, which is the first thing to keep an eye on early in 2015. Then, we’ll see if any Democrats Andrew Schneider? Cord Thomas? Peter Fallon? Christian Dorsey? others?) decide to primary one or both incumbents. Finally, we’ll see how the general election goes: whether the Vihstadt/Garvey/Rousselot alliance can come up with another plausible/electable “independent” candidate; whether the issues that people were so passionate about in 2014 (particularly the streetcar, which Hynes and Jay Fisette decided to “deep six” after the Howze loss in November) will continue to drive Arlington voters. Through all this, how will the Arlington County Democratic Committee hold together (or not) in 2015? Stay tuned, things could be VERY interesting in Arlington County politics in 2015 (whatever happened to the many years when Arlington County Board races were a snoozefest?).

2. Fairfax County Board elections: I’m hearing from numerous politicos that Democrats are a bit concerned about the potential for losing seats on (or in a worst-case scenario, control of) the Fairfax County Board. Currently, there are three Republicans (John Cook – Braddock district, Pat Herrity – Springfield district , Michael Frey – Sully district) and seven Democrats (Chair Sharon Bulova – at large, John Foust – Dranesville, Catherine Hudgins – Hunter Mill, Jeff McKay – Lee, Penelope Gross – Mason, Gerald Hyland – Mt. Vernon, Linda Smyth – Providence) on the Board. Which means Republicans would have to pick up three seats to take control. Which might those be? I’m hearing the most vulnerable districts for Dems are Dranesville and Mt. Vernon if Gerry Hyland retires (which he supposedly is leaning towards doing; personally I think that should be a safe Dem district, but after what happened in Arlington in 2014…who knows?!?). On the other hand, perhaps John Cook might be vulnerable to a strong challenger, given that Democrat Janet Oleszek almost beat him four years ago?

3. Democratic Primary, General Election in Senate District 29: The race to succeed long-time State Senator Chuck Colgan (D) in Prince William County should be a fascinating and important one in 2015. First, there will be a hotly-contest, three-way Democratic primary between Del. Michael Futrell and 2013 House of Delegates candidates Atif Qarni and Jeremy McPike. Then, whoever wins the Democratic nomination will probably face a strong Republican nominee (e.g., Manassas City Mayor Harry J. “Hal” Parrish), even though this is a district that went 57%-39% for Terry McAuliffe over Ken Cuccinelli. Still, you never know what can happen in a low-turnout, “off-off” election year like 2015.

4. Race to succeed State Senator John Watkins (R) in District 10: This one is almost certainly the Democrats’ best shot for a pickup in the State Senate in 2015, one that would bring them back to a 20-20 tie (with Lt. Gov. Northam breaking that tie in their favor, thus giving them effective control of the chamber) if they don’t lose any seats currently held by Democrats. This district went for Terry McAuliffe narrowly (46%-42%) over Ken Cuccinell in 2013, so it should be competitive. But first, Democrats will need a strong candidate, and so far I haven’t heard of one who is ready/willing/able to throw his or her hat in the ring. As for Republicans, they would be smart to nominate a moderate for this “purple” district, but personally I’m hoping they go for as wingnutty a Tea Partier as possible (since that would give Dems a much better shot at taking this seat).

5. Speaker Bill “ALEC” Howell (R) vs. Susan Stimpson (Tea Party) in House District 28: This one will require me to order pounds of popcorn, as I sit back and enjoy watching these two go after each other. And while this district is a tough one for Democrats (e.g., Cooch won it 49%-45%; Gillespie won it 53%-44%), it will be great to see Howell bogged down (and spending his money) in a primary than being able to focus 100% on going after House Democratic candidates.

6. How far right will Virginia General Assembly Republicans go?: Given that the only thing these folks seem to care about is avoiding a primary from their right, and given that they’ve seen multiple examples of this in recent years (see #5 above, for instance), the question is how far right will Virginia General Assembly Republicans feel compelled to push in 2015? Obviously, they won’t be approving Medicaid expansion. Nor is it likely we’ll see any increases in taxes. We’ll see if they do anything serious on ethics and/or redistricting reform (I’m certainly not holding my breath). But how crazy will they get on social issues and other wackiness in 2015? Speaking from a Democratic perspective, I hope they go frothing-at-the-mouth wild, as that should make it easier for Dems to run against them (and hopefully beat a bunch of them) in November. Fortunately, we have Gov. McAuliffe to veto whatever lunacy reaches his desk, allowing Republicans to be as crazy as they wanna be in 2015! LOL

7. Right wingnut vs. right wingnut in Senate District 24: Not that Democrats have any chance in this overwhelmingly “red” district, but watching the crazies go after each other should be highly entertaining! 🙂

8. Can Senate Democrats hold all their incumbents?: Based on these statistics, I’d say the incumbent Senate Democrats who are potentially most vulnerable in 2015 include John Edwards, Lynwood Lewis and John Miller. So far, Edwards has drawn a challenger (“Roanoke civic leader and retired surgeon Nancy Dye”), so we’ll need to keep an eye on that one. We’ll see if either Lewis or Miller draw strong challengers as well. It will also be interesting to see if Sen. George Barker is correct in his “guarantee” that Democrats take control of the State Senate. Seems pretty optimistic, but certainly not impossible by any means, to me.

10. Special election in the 34th House of Delegates district: Democrat Kathleen Murphy, who as I just noted almost beat Republican Del. Barbara Comstock in 2013, is running against Republian Craig Parisot in a special election to replace Comstock. The question in this one is largely which side has the better GOTV (“get out the vote”) operation in what will probably be a looooow-turnout election. Right now, I’d say this one could go either way, especially given that so few people are paying attention, and that so little is known about Parisot (who apparently isn’t doing interviews or responding to questionnaires).

11. The Joe Morrissey soap opera continues…: And when/how it ends, nobody knows. First, there’s a special election on January 13, 2015, in which Morrissey’s running as an independent. We’ll see how “loved” he really is in his district, but I honestly wouldn’t be surprised if he wins that race. I know – ugh!!! If Joe does hang on (or even win by a wide margin), then the question will be whether he’s expelled from the House of Delegates (I’d assume he would be). Then…what? Another special election? Another Morrissey run (and possible victory?) as an independent? Rinse and repeat? Who knows, but remember, this IS a bad soap opera (are there any GOOD soap operas?) after all…

12. Sneaking in two more to keep an eye on: OK, I guess this will be a “baker’s dozen,” as I sneak in two here. First, it will be fascinating to watch how Virginia complies with the EPA’s Clean Power Plan (CPP). I’m hoping that Gov. McAuliffe really takes a leadership role here in pushing as aggressively as possible for energy efficiency, rooftop solar and offshore wind. So far, I’ve heard him whine about how “unfair” the CPP is, which is utter bull****, also just repeating Dominion Power/coal industry talking points. We’ll see. The other one to keep an eye on is Congressional redistricting, given this development in October (“A federal court has ruled Virginia’s congressional map violated the 14th Amendment and instructed the legislature to redraw the state’s congressional boundaries by April 1, 2015.”). On redistricting, Gov. McAuliffe needs to be tough, stick to his guns, and really push for something good — or it’s not going to happen.