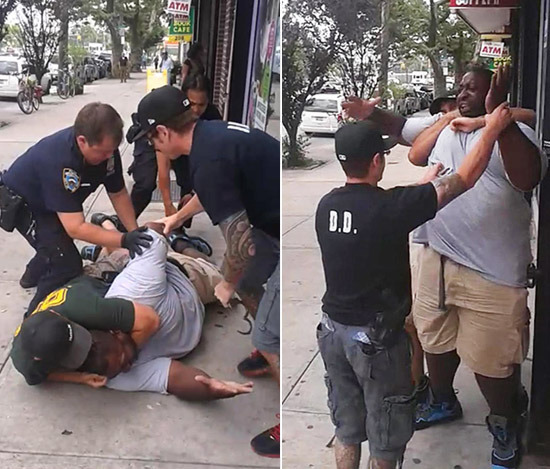 How are we to understand all these shootings, by police, of unarmed black men? And the manner in which the American justice system processes these shootings with the result that very few are indicted, hardly any are convicted, and virtually no one does any jail time? And how are we to understand the way that an impassioned major segment of people on the political right make heroes of the shooters in these cases — like Darren Wilson (and a self-appointed vigilante like George Zimmerman)?

A very dark force in the American body politic — an ancient and destructive component in the consciousness of the American collectivity — is being expressed here. It is all about that component of American civilization, going back centuries, that insists on the power of whites to oppress blacks.

Central to that oppressive power arrangement is making black people — making black men, specifically — afraid. Intimidation is always and everywhere a favorite tool of the oppressor.

In the days of slavery, the white elite created a system of “slave patrols” to capture and punish runaway slaves, and to intimidate the rest of the slave population. In the century of the Jim Crow regime in the American South, a whole range of methods — of which the lynching was only the most dramatic — were employed to intimidate blacks (again, especially black men) into acquiescing in the oppression imposed upon them by the dominant white race.

It is, regrettably, in that context that the pathological pattern of police killings of unarmed black men is to be understood.

What do the recent mottoes “Hands up! Don’t shoot” and “I can’t breathe” express if not a shared sense in the black community that it is dangerous to be an American While Black? And while the police in America truly do — in most ways — “protect and defend” all of us, that is historically not the whole picture. There is also nothing new in American history about the police force also being an instrument for protecting and defending power relationships, some of which are unjust.

And a long tale in that history is the story of police forces being used to keep blacks in a subordinate position. (So also with the judicial system, from the patent falsehood that “separate” would be “equal” to the exclusion of blacks from juries.)

One of the meanings of this rash of incidents, the big historical picture suggests, is that it shows the police serving as instruments of white oppression of black men. Those who are killed in these at best questionable ways — like the slaves who were whipped, and the black men in Jim Crow times who were burned and mutilated and strung up as “strange fruit” — serve as warnings to all those millions still alive.

Fear is used to keep them down.

Who Will Call Out the Party of the Oppressor?

When, in 2008, America elected its first black president, many hoped that this would usher in a brave new period in the history of American race relations. So it might have been, had this black president been up to the task of taking on the ancient forces of white racist oppression that was bound to rear its ugly head. So it seemed reasonable to believe he might do, given the power and the eloquence of candidate Obama’s speech on race delivered at a racially tense time in his 2008 campaign.

But one had only to listen to President Obama’s words to the nation in the wake of the grand jury’s failure to indict in Ferguson, Missouri, to recognize that this black president was more eager to avoid confrontation with that white racism than to lead the nation against it. His words were hesitant, careful. His goal seemed to be to get through this episode without provoking his enemies, without creating a political problem. His posture toward the force of white racism was more appeasing than challenging.

One cannot imagine FDR or Martin Luther King, Jr., shrinking in this way from such an opportunity to summon Americans to the better angels of their nature.

It was already clear long ago, however, that this president had chosen the path of conflict avoidance over winning the battle forced upon him. White racism has been coming at this president from the beginning, and he’s continually refused to take it on.

First, there was the attempt — through the “birther” lie — to make this president into an African, a man not only black but one whose presidency can be declared illegitimate on ostensibly “constitutional” grounds. You owe this president no respect or allegiance, the white racists were thereby assured on such bogus grounds. Obama never took seriously this assault not only on him but on our democracy; he ignored it.

Then, as the Republicans worked over these past six years — albeit more subtly than in the old days of Jim Crow and the Dixiecrats and George Wallace — to summon up the darkest racist impulses among the people on the right, they succeeded in making it politically viable to treat this first black president with a contempt we Americans have never before seen directed at an American president.

They whipped up the latent dark passions in enough white Americans that it became possible for Republican leaders in the Congress talk to and about President Obama with a disrespect and scorn that until now all Americans would have regarded as unAmerican.

But even as these Republicans summoned forth this ugly, long-standing racist impulse — established long ago by the regime of white oppression — this black president has defended neither himself nor his office against this assault. Instead, he shrank from the battle that inevitably was going to be part of the job of being the first black president.

In shrinking from this battle, and leaving the field open for this dark force of racism to rise and grow unchecked, perhaps this first black president was enacting that equally old pattern: a black man being intimidated by the oppressors.

Old patterns die hard. But in this missed opportunity we witness a great American tragedy.

And, unfortunately, not only on those forms of oppression that focus on race. There are other long-standing dimensions of oppression embedded in American civilization, and today’s GOP serves them all.

That party provides a channel for the force of the oppression of women by men, from Virginia’s proposed “transvaginal ultrasound” law to Rush Limbaugh’s rant against a “slut” with the gumption to speak up for the rights of women.

Today’s GOP is a tool of the corporatist system, assaulting the rights of workers, keeping in place a set of arrangements that now deprive American workers of their fair share of their increased productivity and widen our already extreme inequalities in the distribution of wealth and income.

Today’s Republican Party is reliably the instrument of the oppressor, in all its forms. But President Obama has never had the appetite to take on this ugly force of oppression and injustice by calling it out for what it is.

When in a year or so we begin to choose a leader to replace this president, the main priority must be: Who will be most effective in fighting against the oppressor? Who will be able and willing to call out ugly injustice for what it is?

That must be the top priority. For if there is one thing we should have learned in the past six years it is this: if we do not make progress in draining power away from this ugly force, then we will not make progress on all those other “issues” that are the usual stuff of politics.