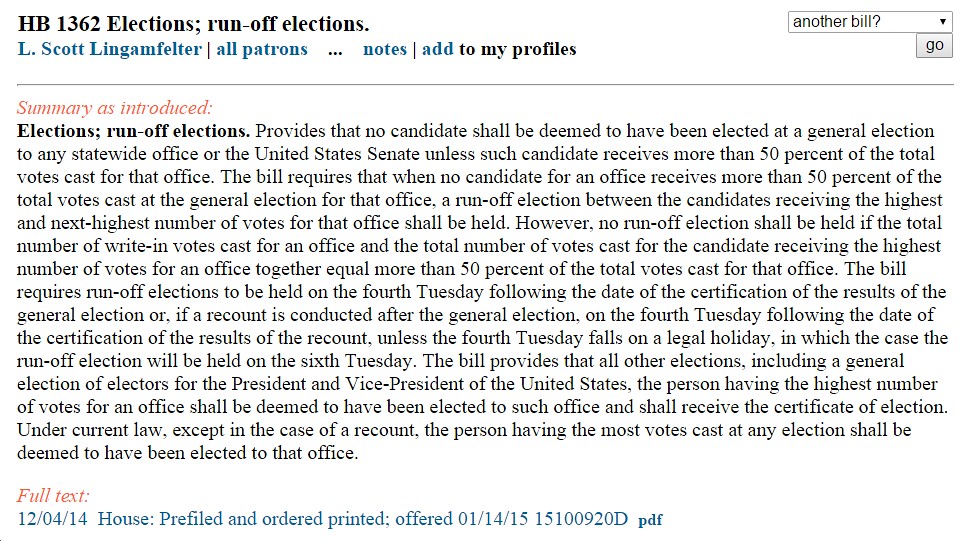 Instead of this really stupid bill (click on image to “embiggen”) by right wingnut and “Agenda 21” conspiracy theory/global warming denier nutjob Del. Scott Lingamfelter (R-of course), how about some better ones?

Run-off elections for all offices also tend to have lower turnout that first round elections, especially if the first round election takes place on the same day as several other elections. For example, of 171 regularly scheduled primary runoffs for U.S House and U.S. Senate from 1994 to 2012, all but six of them resulted in a turnout decrease between the initial primary and the runoff, meaning that 96.5% of federal runoff elections had fewer people voting in the second round than in the first. The average decline in turnout was 35.3%. Additionally, the longer the wait between the initial primary and the runoff, the higher the decrease in voter turnout between elections. Primary elections with a gap of more than thirty days had a median decline in voter participation of 48.1%, while those with a gap of twenty days or less had a median decline of 15.4%.

It also, of course, costs money to conduct a run-off election. As Fairfvote.org explains, this is because “jurisdictions must print ballots, recruit and train pollworkers, locate precincts, and prepare voting equipment — not once, but twice.” Another problem: “this process can often disenfranchise overseas and absentee voters, who will not have enough time to return their ballots after they have been printed and mailed to them.” And yet another problem:

… two-round runoff elections require candidates to raise money twice, often requiring an influx of additional special interest contributions for the second round runoff. Coupled with low turnout in the runoff, this can allow these donors to leverage their campaign dollars for even greater influence, sometimes against the public interest. Similarly, well-organized groups who do not represent a majority of voters can take advantage of low turnout in the second round runoff to try and exert disproportionate influence over the result.

Blech. Finally, keep in mind that lower turnout benefits…wait for it…yep, Republicans. So, shocker that a Republican, particularly one as right wingnutty as Scott Lingamfelter, would come with this idea? Nope.

Of course, I agree with Lingamfelter that it would be better if our elected officials actually received a majority of the vote. The good news is that’s totally feasible, with something called “Instant Runoff Voting” (IRV) There are many advantages to IRV, which Fairvote.org lists here, such as that it “Reduces Election Administration Costs,” and “Improves Voter Turnout,” “Reduces Negative Campaigning.” Under IRV, the “process continues until one candidate earns a majority.” But this doesn’t take time, as it can all be calculated instantaneously by computer. For instance, in the 2014 U.S. Senate race here in Virginia, the candidate with the fewest votes in the first round – Robert Sarvis in this case – would be eliminated, with his voters’ second choices now being counted. Voila, no “spoilers” or “wasted votes,” as your vote will definitely be counted if there’s not a majority for any candidate in the first round. We’ve done it here in Arlington in Democratic caucuses, and it’s worked well. Unfortunately, we can NOT do it in a primary, as that’s governed under state law, and Virginia unfortunately is a strong Dillon Rule state. Of course, if Lingamfelter were serious about improving voting in Virginia, he could simply introduce a bill to allow – or even require – IRV throughout the state. But noooooo….

Another idea Lingamfelter could consider if he were serious about improving voting would be “vote by mail,” which is currently used exclusively in three states (Colorado, Washington, Oregon), and as one option in 27 states. An advantage of using this system exclusively is that it “eliminates the requirements to staff and run a polling center during an election, and can result in considerable cost savings to the state.” An even bigger advantage from the perspective of democracy – although NOT from the perspective of Republicans, who do better the fewer people vote – is that voting by mail leads to high turnout. For instance, while turnout here in Virginia was a miserable 41.6%, in the 2014 mid-term elections, in vote-by-mail Oregon, it was a whopping 69.5%. Not coincidentally, Democrats won big in Oregon, which yet again is a perfect illustration of why Republicans like Scott Lingamfelter are actively working to discourage, not encourage, voter turnout here in Virginia. It really doesn’t take a rocket scientist to figure out motives here.

Bottom line: Lingamfelter’s correct that candidates should get a majority of the vote, but he’s absolutely wrong in the way he goes about it, especially considering that he completely ignored IRV and vote-by-mail options.