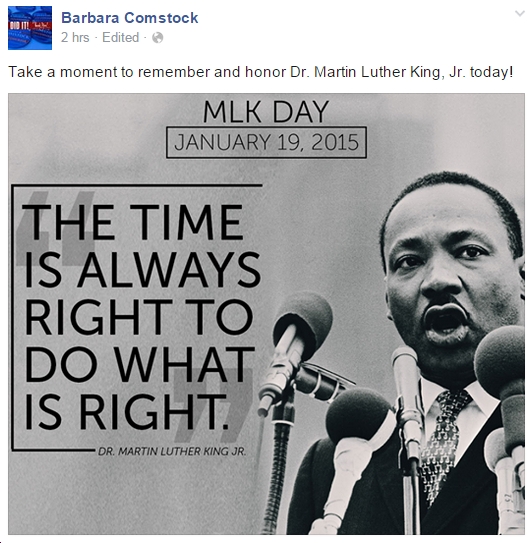 I’m not sure if Virginia Republicans simply have little knowledge of history or no sense of self awareness, but to see them praise Martin Luther King, Jr., despite opposing much (most?) of what he stood for, is truly striking. For instance, Rep. Barbara Comstock cites the King quote, “The time is always right to do what is right.” Yet Comstock is a diehard right winger, anti-progressive, tool of the most powerful in our society at the expense of the most vulnerable, proponent of MORE economic inequality, supporter of minority voter suppression techniques (such as a stringent photo ID law she voted for in 2013), etc.

Not surprisingly, Martin Luther King, Jr. recognized that the Republican Party “geared its appeal and program to racism, reaction, and extremism,” something they honed during the 1970s and 1980s with its infamous “Southern Strategy” of Lee Atwater, Karl Rove, etc. Today, has the Republican Party changed very much, when it uses the fabricated, fallacious excuse of “voter fraud” to push minority voter suppression laws across the country? How about when its Tea Party wing holds rallies at which you don’t have to look very far to see the most vile, racist imagery about Barack Obama, Michele Obama, etc. on their signs? Even worse, in some ways, is the deafening silence, the lack of condemnation, of these signs and rhetoric by leading Republicans. Of course, one of the top Republican House leaders was recently found to have spoken at a white supremacist conference organized by David Duke, and he has NOT been booted out of leadership. Hmmmm.

As for MLK, Jr.’s views on economic fairness and social justice, how many of these quotes or these or these (or many more) do you think Barbara Comstock – or other Virginia Republicans (e.g., Dave Brat, Ed Gillespie, Ken Cuccinelli) would be comfortable with?

*”Our only hope today lies in our ability to recapture the revolutionary spirit and go out into a sometimes hostile world declaring eternal hostility to poverty, racism, and militarism.”

*”True compassion is more than flinging a coin to a beggar. It comes to see that an edifice which produces beggars needs restructuring.”

*”So it is obvious that if man is to redeem his spiritual and moral ‘lag’, he must go all out to bridge the social and economic gulf between the ‘haves’ and the ‘have nots’ of the world. Poverty is one of the most urgent items on the agenda of modern life.”

*”A nation that continues year after year to spend more money on military defense than on programs of social uplift is approaching spiritual doom.”

*”The curse of poverty has no justification in our age. It is socially as cruel and blind as the practice of cannibalism at the dawn of civilization, when men ate each other because they had not yet learned to take food from the soil or to consume the abundant animal life around them. The time has come for us to civilize ourselves by the total, direct and immediate abolition of poverty.”

*“We must create full employment, or we must create incomes. People must be made consumers by one method or the other. Once they are placed in this position, we need to be concerned that the potential of the individual is not wasted. New forms of work that enhance the social good will have to be devised for those for whom traditional jobs are not available... Work of this sort could be enormously increased, and we are likely to find that the problem of housing, education, instead of preceding the elimination of poverty, will themselves be affected if poverty is first abolished”

*”I am convinced that if we are to get on the right side of the world revolution, we as a nation must undergo a radical revolution of values. We must rapidly begin-we must rapidly begin the shift from a thing-oriented society to a person-oriented society. When machines and computers, profit motives and property rights are considered more important than people, the giant triplets of racism, extreme materialism and militarism are incapable of being conquered.”

*”…we must honestly face the fact that the movement must address itself to the question of restructuring the whole of American society. There are forty million poor people here, and one day we must ask the question, “Why are there forty million poor people in America?” And when you begin to ask that question, you are raising a question about the economic system, about a broader distribution of wealth. When you ask that question, you begin to question the capitalistic economy. And I’m simply saying that more and more, we’ve got to begin to ask questions about the whole society. We are called upon to help the discouraged beggars in life’s marketplace. But one day we must come to see that an edifice which produces beggars needs restructuring.”

*”I’m not talking about communism. What I’m talking about is far beyond communism… What I’m saying to you this morning is communism forgets that life is individual. Capitalism forgets that life is social. And the kingdom of brotherhood is found neither in the thesis of communism nor the antithesis of capitalism, but in a higher synthesis. It is found in a higher synthesis that combines the truths of both. Now, when I say questioning the whole society, it means ultimately coming to see that the problem of racism, the problem of economic exploitation, and the problem of war are all tied together. These are the triple evils that are interrelated.”

*Also see here, about how MLK, Jr. wrote the “Foreword to a major document, ‘A Freedom Budget for All Americans.'” The Freedom Budget’s seven basic objectives were:

To assure decent and adequate wages to all who work.

To assure a decent living standard to those who cannot or should not work.

To wipe out slum ghettos and provide decent homes for all Americans.

To provide decent medical care and adequate educational opportunities to all Americans, at a cost they can afford.

To purify our air and water and develop our transportation and natural resources on a scale suitable to our growing needs.

Again, how many of these objectives do Virginia Republicans like Barbara Comstock, Dave Brat, Ken Cuccinelli and Ed Gillespie – all of whom posted graphics and/or comments praising Martin Luther King, Jr. today – agree with? Economic fairness? Social justice? Universal access to high-quality health care and education? Environmental protection? The last I checked, they strongly disagreed with all of them. 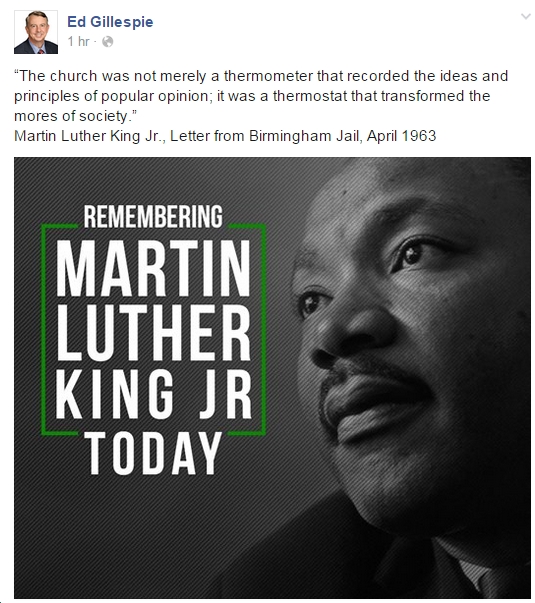 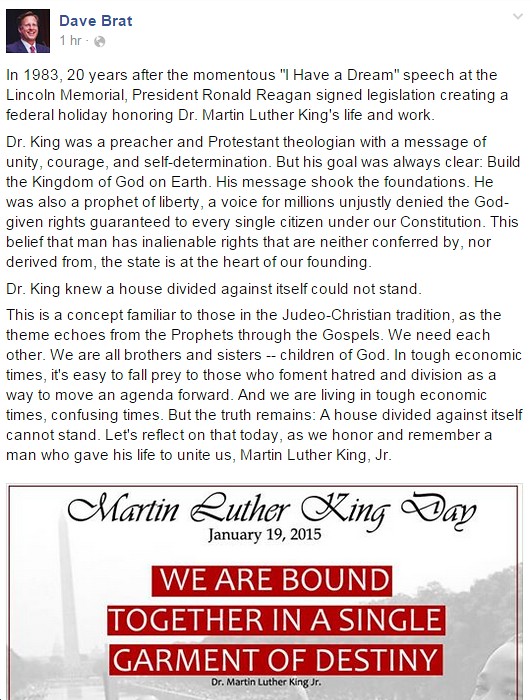 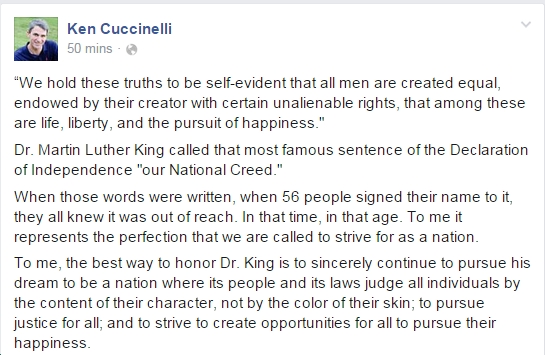