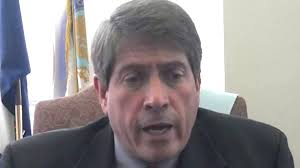 More extremism, intolerance and bigotry from far-right-wing Virginia State Senator Steve Martin (R-Wingnuttia). On his Facebook page, Martin first writes, “I’m thinking that if one’s religion requires they kill others to get to heaven, it’s okay not to tolerate that.”  Obviously, Martin’s referring to Islam (which he frequently rants against), and just as obviously he’s dead wrong — Islam of course does NOT require its adherents to “kill others to get to heaven.” I’d also note that if Martin’s going to make that “argument” against Islam, then he’d better be ready to explain the long history of religious violence in ALL world religions, including his own religion of Christianity (ever hear of the Crusades and/or the Inquisition, Senator Martin?), but that doesn’t mean that those other religions require their adherents to “kill others to get to heaven” either. Yeah, I know, those pesky things called “facts” rear their inconvenient heads again.

Next, a commenter asks Martin on his Facebook page, “Will their religion, culture and laws be protected,under the Constitution?” Martin’s response is chilling and profoundly unAmerican:

In this comment, Martin doubles (triples? quadruples?) down on his ignorance and bigotry. First, he actually puts the word “religion” in quotes, as if Islam isn’t really a religion. Martin further claims that Muslims – 1.6 billion adherents, or 23% of earth’s population, the fastest growing religion on earth – all “celebrate death” and the “denial of liberty,” which of course is beyond ridiculous. Just speaking from personal experience, I’ve known many Muslims in my life, and I can’t think of a single one who believes either of those things.

By the way, it’s also worth noting that Steve Martin and his ilk are the same people who support torture (see “Child’s Host” State Senator: Torture Justified “no matter what body parts are lost in the process”), war, no limits on guns, etc., so they’re not exactly people we should listen to on “denial of liberty” or “celebrating life.” So yeah, Martin et al are extremist nutjobs who should by all rights be completely ignored. Except for one problem: Martin is a Virginia State Senator, and he’s not even necessarily the craziest and most extreme on the Republican side of the aisle (e.g., Sen. Dick Black would give him a good run for his money). Scary.