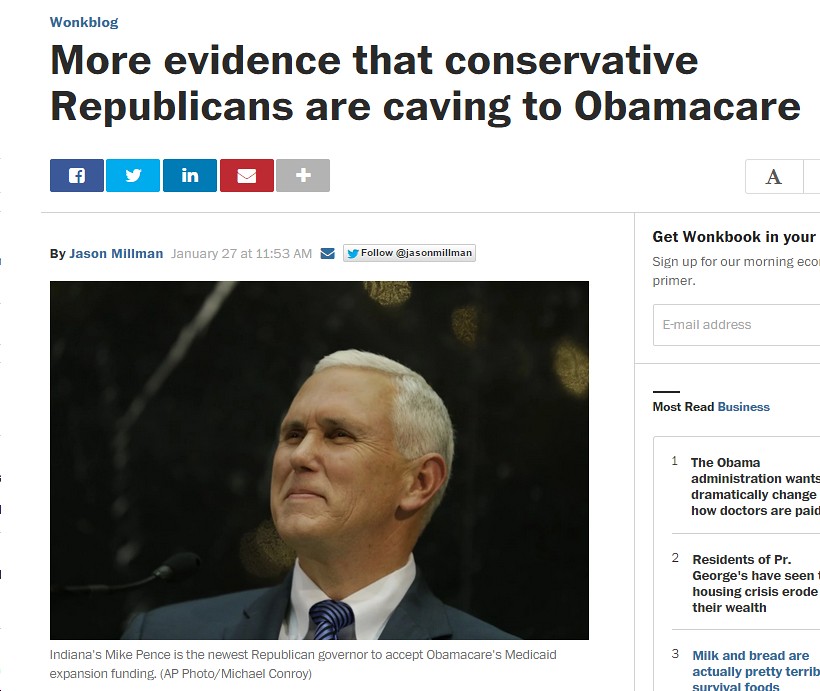 Yep, so we can now add yet another Republican governor to the long list of Republican governors saying “yes” to Medicaid expansion. These Republicans can call their expansions whatever they want (e.g., “Healthy Indiana”); say they’re really not “expanding” Medicaid buy “reforming it” (whatever); claim (falsely) that Medicaid expansion has no connection go the evilevilevil “Obamacare” (also known as the “Affordable Care Act,” whose provisions are highly popular with the American public), blah blah blah.

But the bottom line is, more and more Republican governors are taking this shwwwwweeeeeeet deal for their states’ budgets and their citizens, and not letting the hard-right Teahadists, etc. stop them.

And then there’s Virginia, a “purple” state led by a Democratic governor and Democratic Party who badly want to expand Medicaid, where Republican House Speaker Bill “ALEC” Howell, hard-right-wing Republican Senate Majority Leader Tommy Norment, along with their Teapublican troops, are putting on a modern display of what used to be known in these parts as “massive resistance.” In this case, it’s about health care coverage for poor people, many of whom are these Teapublican lawmakers’ own constituents. But whatever; Virginia Republicans are having none of the common sense and sanity we’re seeing in an increasing number of Republican-led states around the country. Essentially, Virginia Republicans have no substantive argument, other than to essentially admit, “we’re extremists, we’re proud of it, we’re not changing, and that’s that.” Oh, and “screw Virginia’s budget, people who desperately need good healthcare coverage, hospitals which want/need this expansion, etc, etc.

The question is, why would anyone in Virginia vote for these cretins?