From the Democratic Party of Virginia 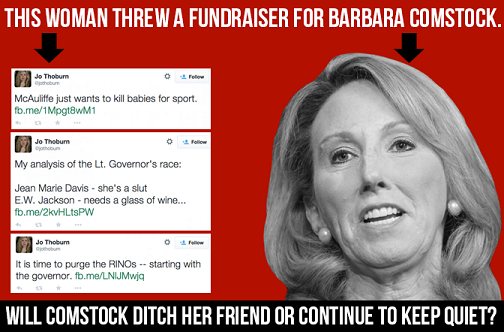 In case you missed the Republican Party of Virginia's latest controversy today, Barbara Comstock's own 10th Congressional District Chair, Jo Thoburn, got caught penning a stunning collection of insulting tweets, often aimed at at members of her own party. While many people have been quick to denounce these hateful writings, one person has been eerily quiet on the matter: Barbara Comstock. While she's never been a fan of the media, one would think she'd take this opportunity to denounce the terrible, horrible things Thoburn said. After all, not only is Thoburn the top Republican Party leader for Comstock's district, she actually hosted a fundraiser for Comstock just a few months ago.
“This is yet another example of how the Republican Party of Virginia is out of touch with not only Virginians, but the concept of basic decency,” said Morgan Finkelstein, spokeswoman for the Democratic Party of Virginia. “Of course, we've heard nothing on this from the party standard-bearer, Barbara Comstock. We know she doesn't care about John Whitbeck's anti-Semitic jokes, but will she stand by her spiteful fundraiser too?”
Apples don't fall far from the tree in the RPV's 10th District — replacing Jew-Joke John with Insulting-Everyone Jo speaks volumes as to how the Virginia GOP cannot be taken seriously. A key GOP leader, Thoburn is charged with spearheading the party's effort to re-elect 10th District Republicans like Delegate David Ramadan, Senator Dick Black, and of course, Comstock herself. With friends like these running the show, Barbara Comstock is certainly earning her spot as a Democratic Congressional Campaign Committee “One Term Wonder.”
There's no paywall on Blue Virginia, and we definitely want to keep it that way! If you want to help support our work, you can donate here - thanks! Also, you can sign up for our weekly email list here.