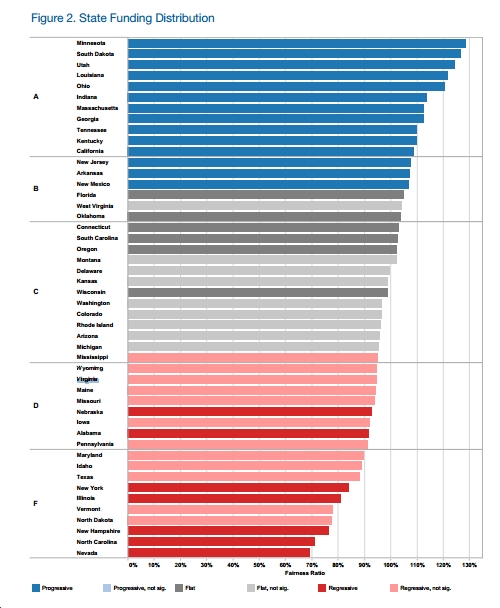 Another day, another study which demonstrates that Virginia has a loooooooooong way to go if it ever hopes to achieve its full potential. In this case, it’s not energy or health care coverage, but education, namely a new “National Report Card” looking at school funding levels and fairness in the states. The reason for the state-level focus, the authors explain, is that the “50 states and the District of Columbia each operate separate education systems often characterized by a complex system of fractured and segregated districts.” This system, the authors point out, has two “predominant characteristics”: “decentralization and concentrated poverty.”

The end result is that there is a wide disparity in “grades,” from “A” to “F,” in different states. Overall, thought, the authors conclude that the “majority of states have funding systems with ‘flat’ or ‘regressive’ distribution patterns that ignore the need for additional funding in high-poverty districts.” Not good.

So how did Virginia stack up compared to the rest of the states in this study? Not particularly well.

*In terms of school funding distribution, Virginia got a near-failing “D” grade, behind Kentucky (“A”), Tennessee (“A”), and ahead of Maryland (“F”) and North Carolina (“F”).

*On the metric if “effort” (“the state’s effort to fund its public schools based on the percentage of the state’s Gross Domestic Product (GDP) allocated to education”), Virginia clocked in yet again with a near-failing “D” grade, behind West Virginia (“A”), Maryland (“A”) and Kentucky (“C”), although ahead of North Carolina (“F”) and Tennessee (“F”).

*On the metric of “coverage” (“the extent to which school-aged children attend public schools and the degree to which there is economic disparity between those within and outside of the public education system”), Virginia ranked #26, ahead of Tennessee (#47), Maryland (#46), Kentucky (#40), but behind West Virginia (#7).

The bottom line is that Virginia has a long way to go when it comes to achieving excellence (or even a passing grade, for that matter) on this education “report card.” As Prince William County teacher and Democratic State Senate candidate Atif Qarni points out: “This is an eye opening study. We are one of the most regressive states when it comes to funding our public schools.” And that should be unacceptable to all of us, particularly when we throw huge amounts of money away on questionable “tax expenditures” like: Jim Gilmore’s “No Car Tax” costs us nearly $1 billion a year; the repeal of the estate tax, which benefits a few super-wealthy families at the expense of everyone else, costs us $140 million a year; subsidies to the coal indutry cost us $45 million a year).  It seems to me that spending money on providing a world-class education to Virginia’s kids is a heck of a lot more important than any of the aforementioned. Is there any serious counter-argument to this no-brainer?