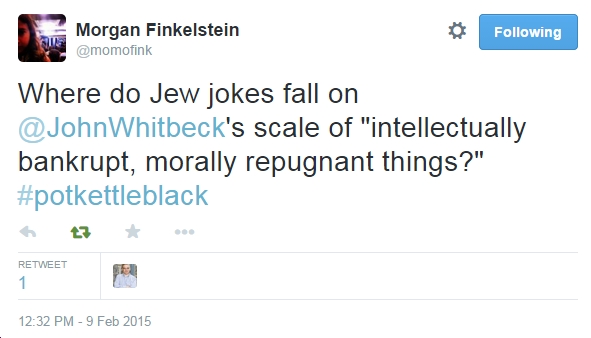 Some things are almost beyond parody, and today we have a perfect example. That would be this frothing-at-the-mouth response by John Whitbeck — the anti-Semitic “joke” dude who is now chair of the Republican Party of Virginia — to the Washington Post’s editorial comparing Virginia Republicans’ irrational, fanatical opposition to expanding Medicaid to the anti-integration “massive resistance” stance by then “Dixiecrats” (today they’re called “Republicans”) in Virginia.

Anyway, Whitbeck’s response is so stupid it almost qualifies as parody. For instance, anti-Semitic “joke” dude claims that “Republicans want quality, affordable health care for all Virginians.” That assertion, if rated by the fact checkers, would almost certainly garner “Pinocchios,” the only question being how many (3 or 4?). Also nonsensical and or laughable: “The Washington Post’s editorial of Sunday on ‘massive resistance’ is one of the most intellectually bankrupt, morally repugnant things I’ve read in a long time” (obviously hit a raw never there; nice job Washington Post! LOL); “Republicans want to craft patient centered, free market solutions to meet the needs of our fellow Virginians” (hahaha); “Republicans are leading the way in finding these types of workable, market-based solutions” (ditto with the scornful laughter); “Ed Gillespie, who put forward a thoughtful, workable plan in 2014″ (uhhhh…”thoughtful?” “workable?” have you actually read that drivel?) and of course “Sunday’s editorial is nothing more than a tacit admission that liberals like the Post’s Editorial Board have lost the argument, but lack the good grace to concede” (yeah, because Republicans have made SUCH a strong argument here — NOT! — against the overwhelming argument for Medicaid expansion).

The reality, of course, is that Republican-led state after Republican-led state is signing onto Medicaid expansion, because they want the billions of dollars of their taxpayers’ money flowing back into their states, not out to other states. Perhaps they even care about their own citizens getting health care coverage, their hospitals not being driven out of business by ideological rigidity, etc? I mean, this really doesn’t take a rocket scientist to figure out, but apparently it’s beyond Virginia Republicans.

Finally, see the tweet above from DPVA Press Secretary Morgan Finkelstein, who notes the absurdity of having the anti-Semitic “joke” guy lecturing anyone on bigotry, racism, etc. Of course, Republicans are the same folks who like to lecture us on the economy after they trash it; on foreign policy after they lead us into quagmires and disasters; “family values” after they make a mockery of them time and again; “personal liberty” after they sic the government on women, gays, immigrants, voting rights for minorities; you name it. Clearly, these folks have zero self awareness, let alone any appreciation of irony. Fortunately, Democrats like Morgan Finkelstein do! 🙂