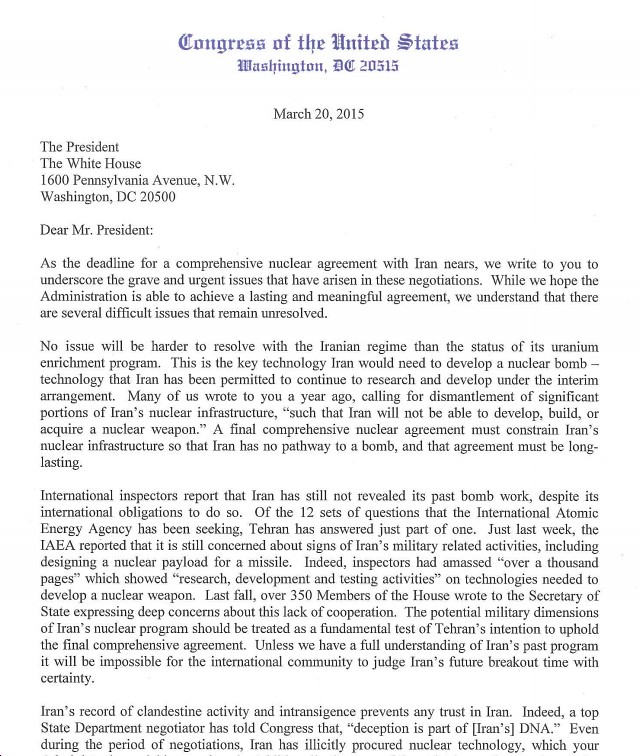 Yesterday, the House Foreign Affairs Committee announced that 367 members of the U.S. House of Representatives had signed and “released a bipartisan letter to President Obama underscoring the ‘grave and urgent issues that have arisen’ relating to the ongoing nuclear negotiations with Iran.” The actionable part is at the end (see blockquote below), following a list of Iran’s transgressions (e.g., ” Iran has still not revealed its past bomb work, despite its international obligations to do so;” “Iran’s decades of deception,” and “Iran’s destabilizing role in the regio”).  The letter also states a clear demand that any agreement with Iran “must constrain Iran’s nuclear infrastructure so that Iran has no pathway to a bomb, and that agreement must be long-lasting.”

The United States has had a longstanding interest in preventing Iran from achieving a nuclear weapons capability. Over the last twenty years, Congress has passed numerous pieces of legislation, imposing sanctions on Iran to prevent that outcome, ultimately forcing Iran into negotiations. Should an agreement with Iran be reached, permanent sanctions relief from congressionally-mandated sanctions would require new legislation. In reviewing such an agreement, Congress must be convinced that its terms foreclose any pathway to a bomb, and only then will Congress be able to consider permanent sanctions relief.

Resolving the nuclear crisis with Iran remains of grave importance to our nation’s security. As the Administration continues to negotiate with Iran, we are prepared to evaluate any agreement to determine its long-term impact on the United States and our allies. We remain hopeful that a diplomatic solution preventing Iran from obtaining a nuclear weapon may yet be reached, and we want to work with you to assure such a result.

The Iran letter was signed by 10 out of 11 members of Virginia’s House delegation, the only non-signatory being Rep. Don Beyer. I’m curious why Beyer didn’t sign (I emailed his office late yesterday but haven’t heard back), while the other two Virginia Democrats – Gerry Connolly and Bobby Scott – did. Personally, I can see reasons for signing and for not signing. Although I don’t really disagree with anything in the letter, the question is whether it is helpful, harmful, or where exactly in between those two?

TAKE ACTION TODAY! Urge Your Delegate to Vote NO TODAY on HB 2173 https://bluevirginia.us/2021/01/two-plastics-chemical-recycling-bills-in-the-va-general-assembly-represent-step-backwards-for-our-climate-public-health-and-environmental-justice-goals#comment-5242798131