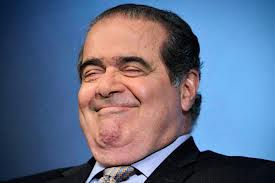 If there is any lingering doubt about whether Supreme Court Justice Antonin Scalia is really a political hack in robes, and in no way a real judge, it looks likely such doubt will be dispelled in the coming months.

I say that because of what seems to be true about him and this case just argued before the Court to try once again to demolish Obamacare.

These two things are reported to be true:

1) Scalia is the author of a whole book on how statutes should be read. In it, he argues (according to several accounts I’ve read — I haven’t read the book itself) that a statute should be read in terms of the statute as a whole.

2) Apparently the signs are reasonably clear that Scalia is going to completely ignore the principles that he propounded in that book in order to strike against Obamacare. That means, he’s ready to allow four ill-chosen words trump the clear intent of the other many hundreds of pages in the statute. Why let principles stand in the way of getting the political victory he desires for his side?

(Almost his whole record suggests that “his side” is the corporatist plutocracy that’s already gone a long way toward seizing power from the people.)

Scalia, of course, has tortured the law before in order to serve the interests of the plutocracy.

He perverted the law in Bush v Gore. He did it in Citizens United and the McCutcheon case. And in a host of other cases: Scalia finds consistently in favor of the corporatist system, and against the power of government to be used to protect the less powerful.

With Obamacare, there are several reasons for a political hack of the right to want to destroy it.

1) It’s all part of the Republican Party’s attempt to prevent Barack Obama from achieving anything. Even something President Obama has already achieved — like passing the first big health care reform in almost forty years — gets continually attacked and sabotaged, from the House Republicans voting more than fifty times to repeal law to the present absurd case that Republican-appointed justices have allowed to come before the Court (much to the shock of legal observers, since the case has so little merit).

3) The plutocracy doesn’t want the American people to experience government as something that can be used to improve their lives. Their goal is instead to make as many gullible people as possible regard the government as the enemy. This helps protect the corporate power from using government to check the depredations of big money, and it also enables the corporate system to wield the power of government to serve its purposes.

So there are Scalia’s supposed principles (as articulated in his book) on the one side, and there’s the right-wing, plutocratic agenda on the other.

A who deserves to sit on the highest judicial bench in the land — because he understand that his job is to apply the law fairly to all, calling balls and strikes the same no matter which side is at bat — would clearly apply his stated principles to this case. This would mean allowing the clear meaning of the Affordable Care Act as a whole to prevail, thus leaving Obamacare standing.

But not — if the observers read him right — Antonin Scalia. For him, the bench is a place where he can help his political side triumph.

If politics is this man’s game, he should run for political office. But a seat on the Supreme Court of the United States is no place for a hack and hypocrite as Scalia will likely once more show himself to be.