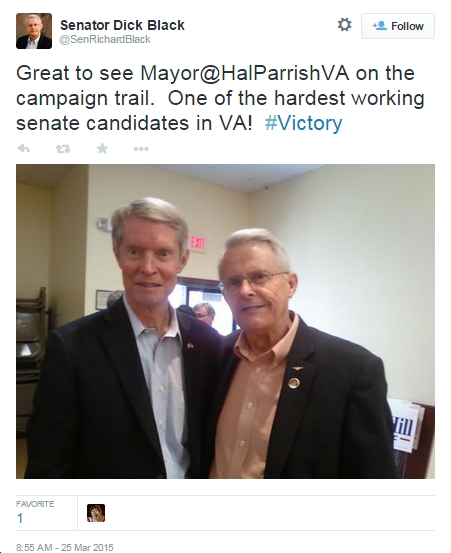 Here are a few national and Virginia news headlines, political and otherwise, for Sunday, March 29. Also, check out that photo of the supposedly “moderate” Republican, Hal Parrish, who’s running for Chuck Colgan’s State Senate seat, posing happily with one of the craziest, most extreme politicians in Virginia…or anywhere in the country, really.

*When to expect more 2016 announcements

*McAuliffe: A loftier vision for public service (“I am firmly committed to taking a meaningful step forward on ethical government every year of my term until we reach our goal.”)

*Schapiro: Ethics debate could ripple into the fall (“Republicans don’t want to give McAuliffe a victory. But they’re leery about handing him a defeat. They worry that rejecting the amendments when the General Assembly returns for its spring session April 15 will supply Democrats with a potent talking point in the fall elections and beyond.”)

*A silver lining at U-Va. (“Rolling Stone’s failings notwithstanding, the uproar caused needed soul-searching about the university’s approach to sexual assault cases.”)

*In Virginia ABC arrest numbers, tilt is toward buyers rather than sellers (Should definitely be the other way around.)

*Virginia State Bar boycotts Israel (Not sure what to make of this, but doesn’t sound good.)

*Time for courage on light rail plans (“Virginia Beach’s City Council has spent too long cowering before a loud but small group whose blinkered vision for the city involves time travel to the 1960s. Or the 1950s.”)

*Racial disparities exists in probation violation penalties, reports show (“More whites than blacks who are charged with probation violations get a break when they go before circuit court judges, case status records from 2014 suggest”)

*In the path of Route 460: New route likely to displace homes, businesses

*Tech Board of Visitors to take up tuition and budget issues