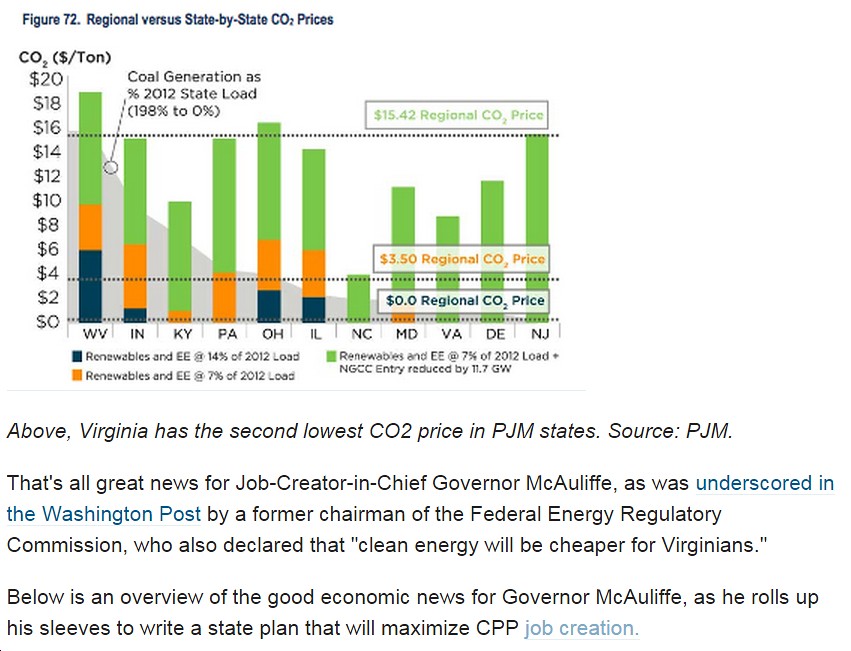 You might recall a bunch of headlines in the corporate media, mindlessly and uncritically parroting a bunch of nonsensical fossil fuel industry propaganda put out by the Virginia State Corporation Commission (SCC) regarding the EPA’s proposed Clean Power Plan. As the Union of Concerned Scientists wrote at the time, the SCC took a “seriously flawed,” “extremely pessimistic and inaccurate view of the state’s ability to join a 21st century clean energy economy, claiming it could only do so at a high cost to electricity consumers.” In fact, the EXACT OPPOSITE is the case: according to the Union of Concerned Scientists: “the Commonwealth is well on track to meet its goals under the Clean Power Plan (CPP), affordably and reliably. A majority of its electricity already comes from lower-carbon energy sources like nuclear, natural gas, and renewable energy.”

How the SCC, which theoretically is supposed to regulate Dominion Power and other corporations in Virignia, could have brazenly spewed out such a Big Lie, and how the media could have blasted the headline all over its pages, is beyond infuriating. And now, the Virginia media is compounding their utter lack of journalistic integrity and intelligence by FAILING to publicize the exact opposite finding, one which happens to be correct, by a definitive source: PJM, the “regional transmission organization (RTO) that coordinates the movement of wholesale electricity in all or parts of 13 states and the District of Columbia.” PJM’s new analysis is summarized here, and can read in full here (PDF). The key takeaways are as follows.

1. “Virginia can generate net revenue from the CPP as early as 2020 through a market-based allowance trading program among PJM states. In such a regional plan, Virginia efficiently reduces its carbon pollution and then sells pollution ‘allowances’ to neighboring states that have more pollution to reduce, generating revenue for the Commonwealth in the process.”

2. Far from the CPP being “unfair” to Virginia, as some have whined, the fact is the exact opposite: “if Governor McAuliffe writes his state plan utilizing a regional PJM market-based approach, Virginia has the second-easiest target to reach among the 11 PJM states analyzed.” Thus, ” Because Virginia’s cleaner fleet is rewarded in this way by the Clean Power Plan (as currently proposed), Governor McAuliffe should be gunning for aggressive clean energy gains in his state plan for the CPP: right out of the gate in 2020, Virginia could sell the carbon reductions across state lines.”

3. “Energy prices in Virginia will decrease under the Clean Power Plan” : According to PJM, Utilizing a regional market-based plan, energy prices would fall in Virginia under the CPP (compared to business-as-usual absent the CPP), if Virginia achieves its modest renewable energy goal and taps into its virtually untouched energy efficiency resources.”

4. “Virginia is already effortlessly coasting toward compliance with the Clean Power Plan”: According to PJM, under current/”business-as-usual” trends: “Virginia will be 80% of the way to its pollution reduction goal in 2020. This is mainly due to the already-underway phaseout of the state’s oldest and dirtiest coal plants and an increased use of lower-polluting resources. And, by 2030, thanks to an EPA formula that favors Virginia’s particular energy mix (more on that below), Virginia is on track to overcomply with the Clean Power Plan, again under a business-as-usual, don’t-do-a-thing approach.”

Is this the no-brainer of all no-brainers or what? Oh, and if you’re a big coal fan for whatever (stupid) reason? It turns out that “one of the best ways to keep coal units online, ironically, is to double down on renewables and energy efficiency,” as “the addition of clean energy into the state’s energy mix reduces the burden on coal plants to do the carbon cleanup themselves, by displacing their carbon-intensity with zero-emissions clean energy.” So, let’s stop the whining, seize this “silver platter” opportunity, and get to work making Virginia the clean energy capital of the East Coast!

P.S. As for the SCC, how about firing everyone responsible for the embarrassingly false propaganda…er, “analysis” it put last fall, totally restructing the agency so that it serves the people of Virginia (not only the rich and powerful), and basically starting all over again?