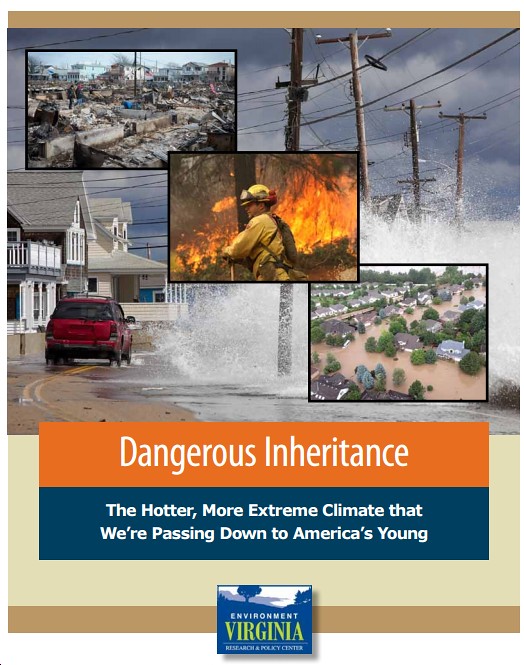 Young adults in Virginia are experiencing hotter temperatures and more intense storms than their predecessors did in the 1970’s, according to a new report by Environment Virginia Research & Policy Center.

This report comes out as NASA scientists announced, just this month, that this year’s Arctic sea ice cap was the smallest it has ever been in recorded history and that the first two months of 2015 were the warmest such period ever. This new report, Dangerous Inheritance, examines climate changes at the local level, through the eyes of five different generations of Virginians.

Millennials in Virginia, like me, came of age in a climate 1.2 degrees hotter than did their Baby Boomer parents in the 1970’s. That means for young adults living in the commonwealth, hotter temperatures more extreme weather events and rising seas have become more frequent and common. Researchers found similar increases in temperatures and extreme weather across the country. In every state, young adults today are experiencing warmer average temperatures than young adults in the Baby Boomer generation. The biggest rain and snowstorms produce 10 percent more rainfall in 2011 than they did in 1948.

These impacts are real and only getting worse. Joining Environment Virginia in releasing this report today, two Hampton Roads residence spoke to their personal experiences. John Deuel, an independent contractor and long-time Norfolk resident spoke about the combination of rising seas and more precipitation leading to flooding in his neighborhood. And Alden Cleanthes, a Chesapeake resident with a 3-year old son and a “Supermom” with non-profit Moms Clean Air Force spoke about the need to protect public health.

Nobody wants to leave the next generation to inherit an even more dangerous climate, so we must take action. We can start by finalizing and implementing the U.S. Environmental Protection Agency’s Clean Power Plan, which would cut carbon pollution at least 36 percent in Virginia and 30 percent nationwide by the end of the next decade.

To ensure that the Clean Power Plan is approved and put into place, we need to Senators Kaine and Warner to stand up for the plan in Washington, D.C. Thankfully, they did just that last week when they voted against Senate Majority Leader Mitch McConnell’s attacks on the Clean Power Plan in the U.S. Senate. We applaud them for this action. And, here in Virginia, we need Governor Terry McAuliffe to stand behind the plan and maximize its potential to unleash clean energy jobs in the commonwealth.