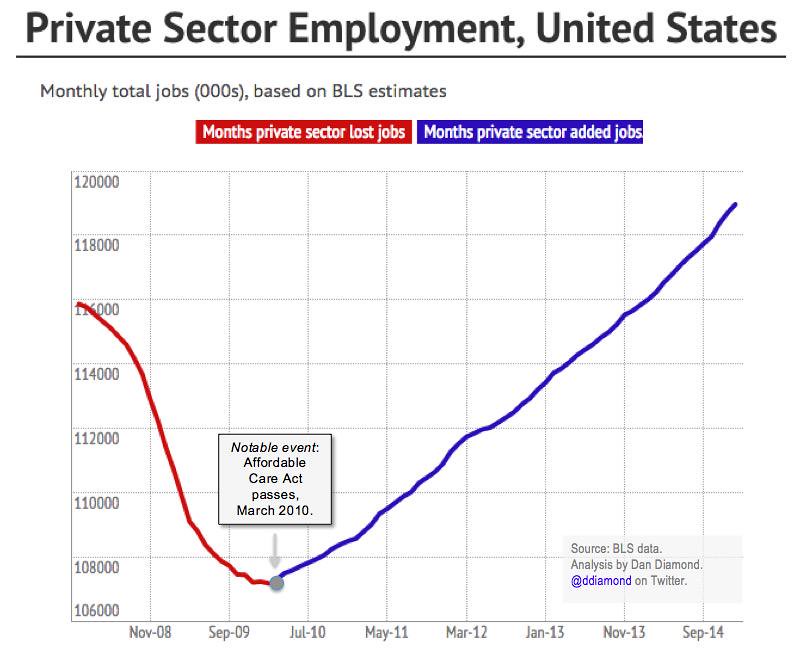 With employment booming, with the U.S. economy approaching what economists refer to as “full employment,” and all this 4+ years after the Affordable Care Act (aka, “Obamacare”) became law, it’s a good time to look back at how wildly, spectacularly wrong Republicans were in pretty much everything they predicted would happen once “Obamacare” kicked into effect. Specifically, they were wildly wrong about health care costs — in fact, Healthcare spending in the US grows at slowest rate since 1960. They were also wildly wrong about the supposed “job-killing” impacts of Obamacare. To the contrary, as you can see from the graph, since this law passed in March 2010, jobs just keep growing and growing, with no end in sight.

And remember, the economic recover has come about in SPITE of incessant Republican attempts to sabotage the economy, whether by blocking aid to states, pushing for foolish “austerity” policies such as “sequestration,” threatening the very credit-worthiness of the United States, refusing to invest in our country’s infrastructure, etc, etc. Just think how much BETTER the economy would be if Republicans a) didn’t get us into the “Great Recession” in the first place; and b) didn’t make it their #1 priority that Barack Obama (and with him, the rest of the country) “fail.”

Anyway, in the interest of accountability, here are just a few quotes (they are endless; you could spend all day on this) from Virginia Republicans predicting that “Obamacare” would kill jobs and do all kinds of other horrible things, none of which came to pass. Just keep this in mind next time any of these people open their mouths about anything, and certainly the next time they are on the ballot!

Ken Cuccinelli, 11/1/13: “We are already seeing the harmful effects this law is having on our economy as workers see their wages and hours cut.” WRONG!

Ed Gillespie (1/14/14): “Unfortunately, Senator Warner has voted for job-killing policies, including casting the deciding vote for ObamaCare, and to increase taxes by nearly $1 trillion dollars and our debt by $7 trillion dollars since taking office long after I left my old firm.” WRONG!

Barbara Comstock (2013): “Obamacare is a ‘trainwreck’…Virginia should continue to press for healthcare reforms for our businesses and citizens and press Washington for more Virginia control of how we do that and do in a way that provides better actual healthcare for our citizens, without stiffling [sic] economic recovery, as this bill has done to date.” WRONG!

Scott Rigell (8/26/13): “Rigell pointed out the devastating, but not unexpected, impact the law is having on employers.” WRONG!

Robert Hurt (4/14): “I voted to repeal the government takeover of health care that raises costs, increases taxes, spends trillions of dollars that we don’t have, cuts Medicare by $500 billion, and destroys jobs.” WRONG on all counts!

Rob Wittman (10/30/14): “Thousands of Virginia’s are losing their coverage, facing skyrocketing insurance premiums and losing their doctors under Obamacare. Employers across the Commonwealth say that the law is preventing or slowing down hiring and growth.” WRONG, WRONG, WRONG!

Sen. John Bell: “Senator Chase is clearly not sorry for supporting the insurrection…My resolution to censure Senator Amanda Chase will be going forward next...

Video: As VA GOP Argues Endlessly Over Its Method of Nomination, State Central Committee Member Complains About “the VICIOUS incivility and attacks that have...