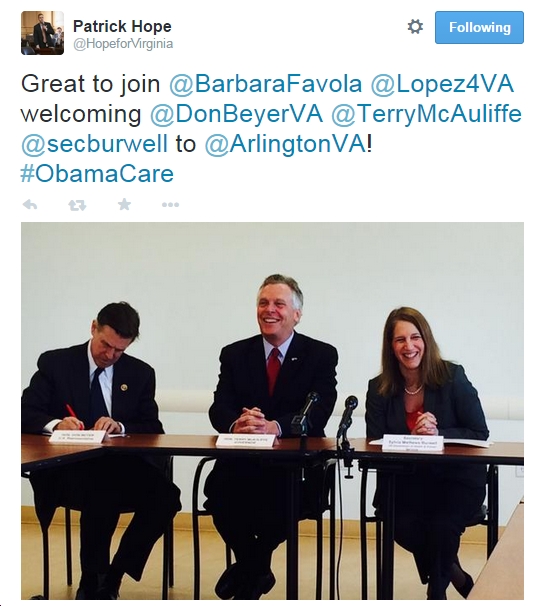 What amazes me about the Affordable Care Act is how it’s worked out so well, even better in some ways than people had predicted, and how Republicans were were wrong about pretty much every aspect of what would happen. Now, just imagine if Republicans had been cooperative, instead of obstructionist, how many more people could have health insurance coverage right now under Medicaid expansion, etc. It’s truly disgraceful how Republicans have acted, as well as bizarre, given that the ACA was modeled heavily after their own plans and proposals (e.g., Romneycare).

“Historians will one day write that the Affordable Care Act was the single most important act of moral leadership in the early 21st century,” said Rep. Beyer. “Emancipation, women’s suffrage, Social Security, the Affordable Care Act – each a bold move to expand upon the idea that all Americans have the equal right to life, liberty, and the pursuit of happiness.

“But we still have more work to do. Especially in the Commonwealth of Virginia. There is no denying that we badly need Medicaid expansion. We are lucky to have a true champion, fighting the good fight in Richmond. Governor McAuliffe has been courageous and relentless – and one day soon he will prevail, and the amount of human suffering he will banish is almost beyond imagination.”

Governor McAuliffe’s plan expands access to care, improve care for veterans and those with severe mental illness, and enhance value and innovation across our health system in the Commonwealth of Virginia. The Healthy Virginia Plan provides health insurance to as many as 25,000 Virginians, however more than 400,000 Virginians will continue to be uninsured as long as Medicaid expansion is not passed through the General Assembly.

Over 16 million Americans have gained quality, affordable health insurance since the ACA became law. More than 11 million Americans were able to sign up or re-enroll through the Marketplace during this year’s Open Enrollment. Nearly 80 percent of 2015 Marketplace customers using HealthCare.gov purchased coverage for $100 or less after tax credits.