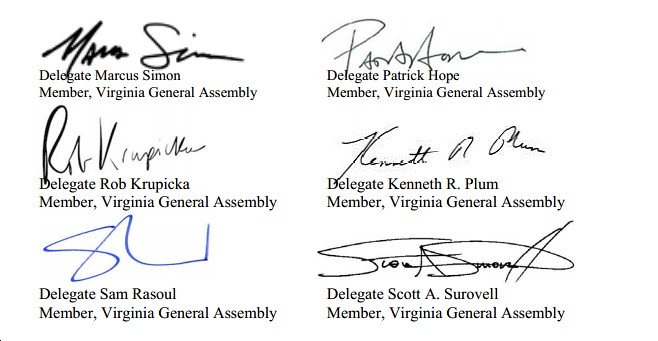 The undersigned members of the Virginia House of Delegates have serious concerns about the Conference Report for HB 2070 State and Local Government Conflict of Interests Act, General Assembly Conflicts of Interests Act (the “Ethics Reform Bill”) approved in the waning hours of our abbreviated regular session on February 27, 2015.

The unanimous vote on the matter should not be taken as a sign that there was universal agreement that the legislation was adequate. Many of us were in the queue to speak to the report and ask questions of the conferees when Republican lawmakers abruptly ended debate. The Speaker further refused to acknowledge any debate whatsoever on the Senate version of the legislation. Had we had the opportunity to more thoroughly discuss our concerns, we believe the House would have rejected the Conference Report and requested a second committee of conference with the Senate to correct some glaring deficiencies in this legislation, given that session wasn’t scheduled to adjourn until the following day.

Moreover, this legislation applies to thousands of elected officeholders across the Commonwealth. Neither they nor the press were provided any kind of meaningful opportunity to provide input into the conference report before it was debated and voted. This glaring lack of sunshine on such an important piece of legislation undermines its legitimacy. While we appreciate the hard work that went into this legislation, we believe the explanation of the fortyeight page bill and the fifteen minutes or so we were given to review it caused some members to rely on misstatements about what the report did and did not do. Specifically, we were told that this bill, although imperfect, went farther to restrict gifts than the current law. However, based on our analysis of the conference report now that we have had time to properly review it, we have concluded that exactly the opposite is true.

Although the Ethics Bill would decrease the maximum allowable gift from $250 to $100, the $250 limit was an annual, aggregate cap. Under the 2015 legislation, there would be no limit to the number of $100 gifts a legislator could receive from the same person in a calendar year. This is just the beginning of the problems with the bill. We encourage you to correct this deficiency and to recommend amendments to do all or some of the following:

• Empower the Ethics Council to audit, receive and investigate signed complaints, subpoena records, and refer for prosecution. There’s no central ethics watchdog for citizens to refer to.

• Mandate the Ethics Council to audit a minimum number of Statements of Economic Interest and Campaign Finance Reports on an annual basis.

• Close the myriad travel loopholes and require affirmative approval rather than allowing a non-response to equal approval. • Reinstate the requirement for the Council to post travel waivers online

• Create a uniform reporting process. Local officers file paper reports with local clerks, except for constitutional officers who will file electronically with the Council.

• Create a uniform definition of personal friends which is defined differently for candidates, legislators, and local officials.

• Subject requests for amendments or more information from the Council to FOIA as is currently the case with campaign finance filings. • Campaign finance funds should not be available for use for personal purposes. Monies donated for campaigns should be used for campaigns and not for members’ gasoline, mobile phones, meals, or utilities on their residence – especially such expenses during session when we are compensated for those items via a per diem and mileage reimbursement.

• Members should be required to report if they or their businesses have taken the benefit of any state tax credits on their Statements of Economic Interests. If a piece of legislation puts a tax credit in a member’s pocket, their voters should have the right to know that before casting a vote.

Virginians want and deserve a government they can trust. Public confidence in their local governments and the General Assembly has suffered after the trial of former Governor Bob McDonnell and his wife. Widely reported statements by the Senate Majority Leader and other alleged proponents of this legislation indicating their own doubts about the wisdom and necessity of ethics reform have raised more questions about the integrity and intentions of some in state government. Please consider making the changes outlined above and sending us an ethics bill worthy of our great Commonwealth in time for the reconvened session.