The Senate voted earlier this afternoon and failed to override President Obama’s veto of the “ram-filthy-Canadian-tar-sands-down-our-throats” bill. Thank you to Tim Kaine, and to the 36 others, who voted against overriding. As for Democrats who voted to override the veto, including Virginia’s own Mark Warner, to put it mildly I’m not pleased. What is it about the science of global warming, and the dire/urgent need to get off of fossil fuels ASAP, don’t they understand? Also, what don’t they understand about the fact that Keystone XL would only produce at most a few dozen permanent jobs, while encouraging production of some of the dirtiest, nastiest fossil fuels on earth? Are these people 100% bought-and-paid-for or what? 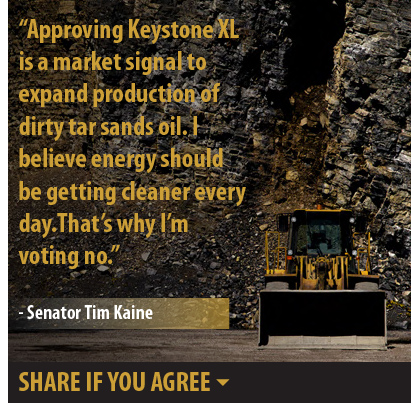 Trump 2016 Virginia director John Fredericks not pleased with Rep. Denver Riggleman (R-VA05) saying he might vote for Joe Biden. Can't wait for all the media stories about "Republicans in disarray!" LOL https://bluevirginia.us/2020/10/video-rep-denver-riggleman-r-va05-says-he-might-vote-for-joe-biden-unless-trump-repudiates-conspiracy-theories#comment-5116699226