That’s right, according to Ken Cuccinelli, who Virginia Republicans nominated at the top of the 2013 “Extreme Team” of Cooch/E.W. Jackson/Mark Obenshain for the top three statewide elective offices in Virginia, John McCain – a conservative by any sane person’s measure – is actually someone who…

“…takes a baseball bat to conservatives and conservative principles all the time. And then he turns around and kisses and hugs with the Democrats,” said Cuccinelli, the former attorney general of Virginia.

“He is vicious, vicious, anti-conservative Republican, and you can see what he’s done in Arizona.

“He has been purging the Republican Party in Arizona for a long time as best he can of conservatives, of people who actually have principles and expect their elected officials to stick to them.”

As Cooch himself always likes to say, “you can’t make this stuff up!” 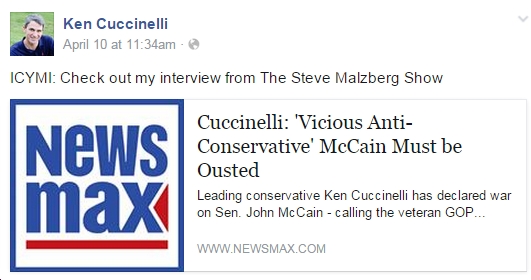