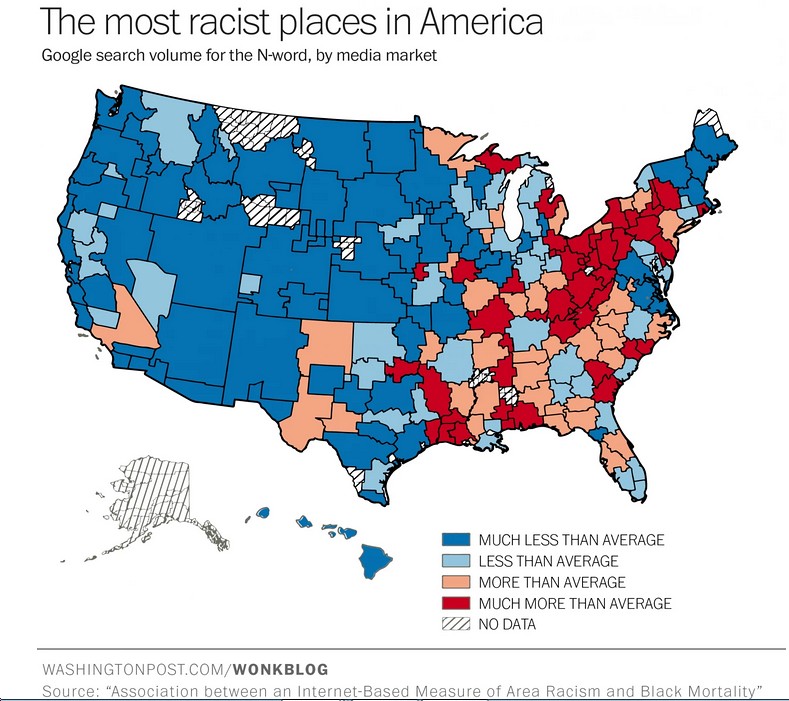 Interestingly, on the map above the most concentrated cluster of racist searches happened not in the South, but rather along the spine of the Appalachians running from Georgia all the way up to New York and southern Vermont.

Other hotbeds of racist searches appear in areas of the Gulf Coast, Michigan’s Upper Peninsula, and a large portion of Ohio. But the searches get rarer the further West you go. West of Texas, no region falls into the “much more than average” category. This map follows the general contours of a map of racist Tweets made by researchers at Humboldt State University.

Note that in Virginia, the northern and eastern portions are much LESS racist than average. The further southwest you go, it transitions rapidly to “more [racist] than average” and then “much more [racist] than average.” It’s also interesting that this map largely aligns with the partisan divide in Virginia, with the “bluest” parts of the state – the “urban crescent” from Northern Virginia to Richmond to Hampton Roads – being the least racist, and the “reddest” parts of the state being the most racist. It would be fascinating to do this study for other forms of bigotry, such as anti-Latino, anti-LGBT, etc. I wonder if anti-black racists also tend to be bigoted in other ways (that would be my guess, a priori).