You know how a lot of Democrats love to vote in presidential and “federal” elections, but skip the local elections where, arguably, their vote matters a gazillion times more? Well, 2015 in Virginia epitomizes that situation, with turnout likely to be extremely low (in the 20-30 percent range?), despite the fact that the ENTIRE Virginia General Assembly is on the ballot, as are many important local offices, such as the Fairfax County Board of Supervisors. For instance, in the Mt. Vernon magisterial district of Fairfax County, Supervisor Gerry Hyland (D) is retiring after many years of service, which means that there is an open seat and a competitive race to succeed him.

On the Republican side, it looks like their candidate will be Jane Gandee, who as you can see from the invitation below, was on the “Host Committee” for a reception in support of one of the most virulent, bigoted extremists in American politics – E.W. Jackson – and featuring another bigoted extremist – Allen West – as a “special guest.” Can you imagine the nightmare of Jackson/West-supporting Gandee replacing the excellent, progressive Hyland on the Fairfax County Board of Supervisors? Well, as unlikely as you might think that is in a generally “blue” part of Fairfax County, it’s possible if Democrats don’t turn out this November and Teapublicans do (don’t believe it; see here and note that Sharon Bulova actually LOST Mt. Vernon, by nearly 200 votes, in a 2009 special election!).  So…make sure you vote this November, and well before then, if you can get involved in any way to help elect Democrats, please do! 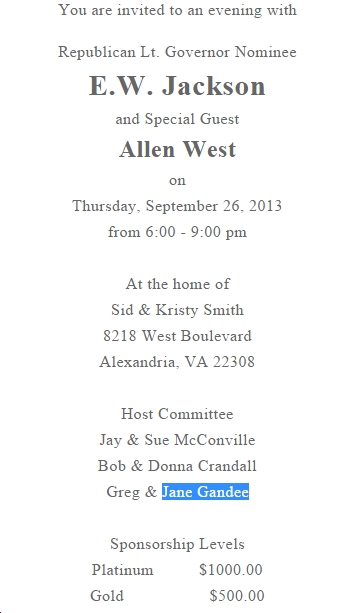 In addition to Sen. @BillStanley (R), now hard-right Sen. @MarkObenshain has also gone after Sen. @AmandaChaseVA (R), in this case for the "offensive" and "crazy" things she says. For once, gotta agree with Obenshain! LOL https://bluevirginia.us/2020/11/va-sen-amanda-chase-falsely-claims-virginia-dem-party-racist-to-its-core-they-want-the-richmond-registrar-to-resign-because-shes-white#comment-5163046103