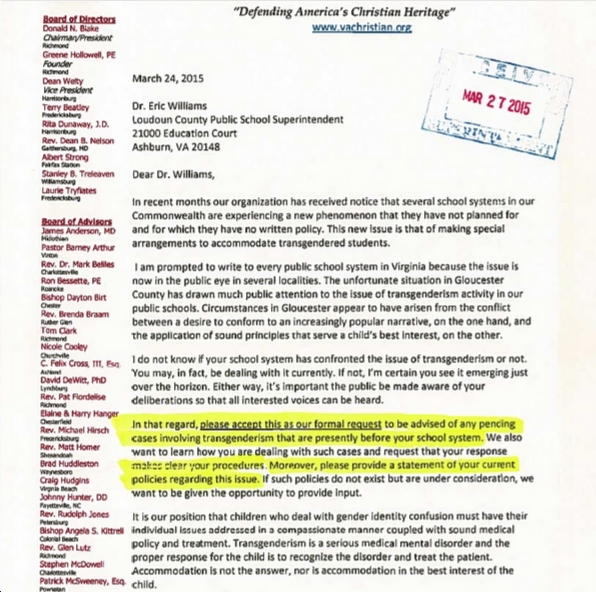 If you haven’t seen it, I encourage you to check out this Think Progress story, on the far-right-wing, theocratic Virginia Christian Alliance’s latest crusade.

Last month, Stafford County, VA, made national headlines when its school board unanimously voted to ignore guidance from both school district officials and the Department of Education that “sex” protections under Title IX protect transgender students’ use of facilities that match their identified gender. After some local parents complained, the school board ordered that a fourth grade student no longer be permitted to use the bathroom of the student’s identified gender. The school system in Gloucester, VA, is currently facing a federal civil rights complaint after it restricted a transgender sophomore boy to using only a single-stall restrooms or designated female restrooms.

In light of these stories, the conservative Virginia Christian Alliance (VCA) has launched a statewide campaign to demand school systems deal with “transgenderism activity” and “gender identity confusion” as “a serious medical mental disorder.” In a letter sent to school boards across the Commonwealth of Virginia, the group’s chairman and president Donald N. Blake demanded to be “advised of any pending cases involving transgenderism that are presently before your school system” and the policies each system has in place to deal with transgender students. “Accommodation is not the answer,” he wrote, “nor is accommodation in the best interest of the child.” Though the American Psychological Association stopped classifying being transgender as a mental disorder in 2012, the letter cites a 2014 article by anti-LGBT Johns Hopkins professor Paul McHugh that argued that “the idea of sex misalignment is simply mistaken” and that transgender people should be treated like those with anorexia and bulimia nervosa. McHugh’s widely debunked claims about trans identities run counter to consensus of the medical profession.

Unsurprisingly, this isn’t the first time the Virginia Christian Alliance has shown its bigotry. Back in December 2014, for instance, they teamed up with fellow bigoted extremist E.W. Jackson to attack Virginia Department of Health Interim Commissioner Dr. Marissa Levine, who is transgender, as having “a “serious mental illness” and “serious issues.” Charming. Also see here for more about what this group believes, including “refuting Darwinian Evolution, Theistic Evolution, Gap and Age-Day Theories, and Progressive Creationism;” “refuting sexual promiscuity: adultery, fornication, heterosexual oral sex, pornography, incest and bestiality, pedophilia, and homosexuality;” and “refuting foreign cultures, legal precedents, languages and religions in opposition to Christianity.” So yeah, these are the same people on a rampage about “transgenerism activity” here in Virginia, as opposed to say, fighting to “feed the hungry,” “clothe the naked,” working for social justice, and other priorities their religion actually calls for.

P.S. Can someone please point out to me in the New Testament, which presumably members of the Virginia **Christian** Alliance believe in, it urges people to be nasty, intolerant, bigoted, ignorant jerks?  Right, it doesn’t.