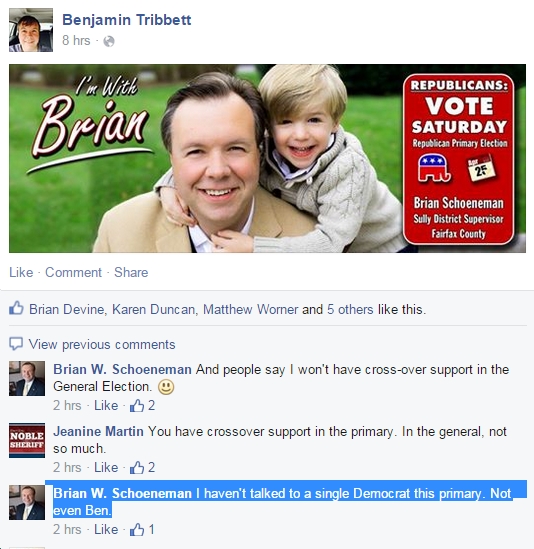 This is amusing on multiple levels, starting with the very concept that Ben Tribbett, a consultant to Fairfax County Board/Sully District Democratic candidate Kathy Smith, would be “with Brian Schoeneman,” one of three Republicans vying to run against, and hopefully lose to, Smith this fall. Of course, Schoeneman is the least right wingnut of the three candidates in this race, with the cardinal sin (in Teapublican eyes) of working for a union, but given how far right the Republican Party is these days, that’s not saying much. Still, on those grounds alone, one could argue that Schoeneman might be the toughest candidate against Smith in November. Or, one could argue that since this year will be a super-low-turnout, nearly-100% “base” election, that the key for Republicans will be to fire up their right-wing/Tea Party activists, and that Schoeneman would be the LEAST likely to do that. So…would Schoeneman be the strongest Republican candidate, the weakest, or something in between? Got me, but Ben’s having fun with it, and who can blame him? 🙂

Even more fun is watching right-wing bloggers fight over What It All Means. For instance, at leading right-wing Virginia blog “The Bull Elephant”, the top post right now asserts that since Ben Tribbett posted an “I’m with Brian” graphic on his Facebook page, Schoeneman must be the Republican candidate Kathy Smith and Sully Dems most want to face. “The Bull Elelphant” blogger Jeanine Martin even writes: “This is part of the group, ‘Democrats for Brian Schoeneman’. I hear their numbers are growing because so many of them identify with Brian…Ben’s telling them to vote for Brian because he considers Brian to be the easiest to beat.” Hahahaha.

Then there’s the comment thread on Ben’s Facebook post, which hilariously has Schoeneman implausibly claiming, “I haven’t talked to a single Democrat this primary. Not even Ben.” In response, Democratic nominee Kathy Smith writes, “Brian, it was nice to talk with you at my town hall in March.” Zing! And Ben adds, “Well, there goes ‘I haven’t talked to a single Democrat this primary.'” Former Fairfax Dems’ chair Rex Simmons then chimes in, “Why am I not surprised that [Schoeneman] lies?” Schoeneman then says he didn’t mean it “literally,” while Ben notes: “There are pictures of Brian talking to me at the Sully debate. Not sure why he says things that are so obviously untrue.” On and on it goes, when it stops…well, maybe tomorrow at 4 pm, when Schoeneman will either win (I’m personally hoping he does, just so this fun can continue another few months! LOL) or loses (in which case Ben can take up a new hobby? haha). Stay tuned, but meanwhile sit back and enjoy watching Ben masterfully mess with Republican minds. 🙂