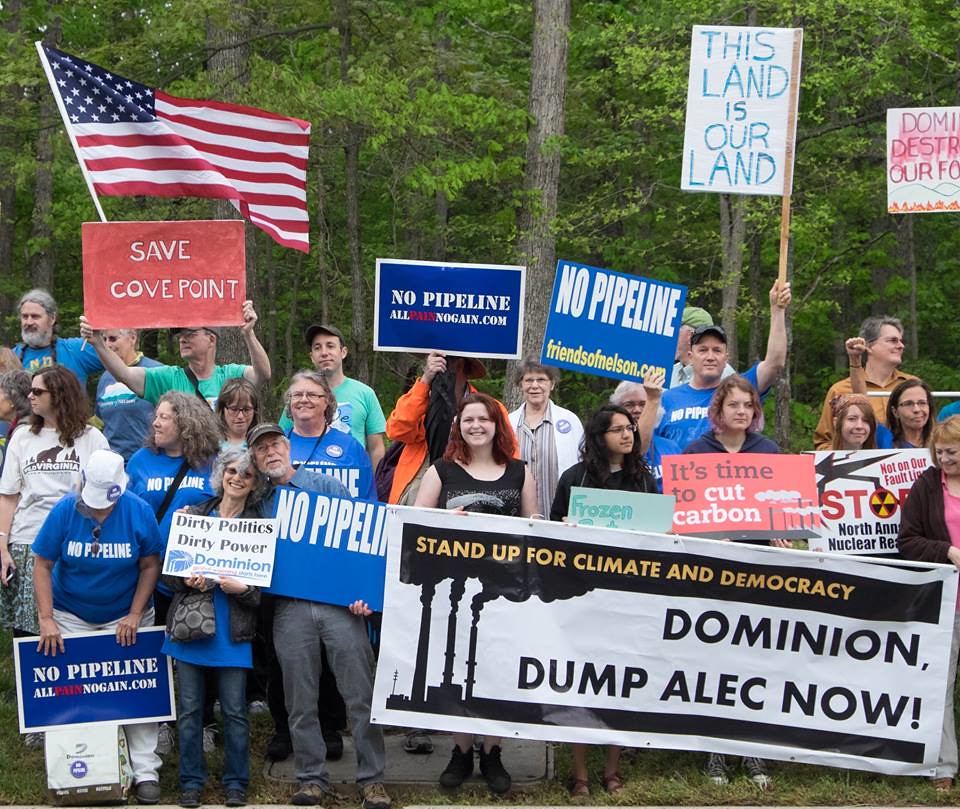 Protesters from Augusta Co. to Norfolk to Cove Point, Md. unite to challenge business practices wrecking communities and the climate

Glen Allen, Va.-As many as 140 protesters from across Virginia and Maryland greeted Dominion Resources executives and board members arriving for the company’s annual shareholder meeting this morning, in a sign of the growing citizen backlash over the company’s dirty energy investments and dirty politics.

More than 50 landowners and concerned citizens from Buckingham, Nelson, and Augusta Counties-all in the path of the company’s controversial proposed Atlantic Coast Pipeline- journeyed by bus. They were joined outside the entrance to Dominion’s training facility by citizens who had packed vans from Northern Virginia, Hampton Roads, and other communities fighting the company’s climate-threatening plans and its anti-democratic lock on Virginia politicians.

Protesters charged that Dominion-the top corporate campaign donor and top climate polluter in Virginia-is using its vast political influence to stack the deck in favor of costly and risky investments in massive ‘fracked’ gas and nuclear projects, trample the property rights of landowners, and attack sensible solutions like the federal Clean Power Plan.

“Dominion and its shareholders need to know that we are here today because the plan to route the Atlantic Coast Pipeline through our home deeply violates so many of our personal and community values,” said Joanna Salidis, President of Friends of Nelson County. “Property owners want Dominion to respect that ‘No’ means ‘No.’ We want Dominion to uphold their claim that eminent domain is a method of last resort — not a gift from the government to maximize profit on the backs of unwilling private property owners and communities.”

To underline their point, protesters erected a “Dominion-opoly” board showcasing the sites of dirty energy projects currently proposed or under construction by the company. A 40-foot mock pipeline was inflated and carried atop the crowd, while chants and colorful banners drew the attention of arriving attendees and passersby.

“Students from campuses across Virginia are heeding the warning of climate change and are now acting on what they have found to be the most urgent issue that we as humans have collectively faced,” said Rabib Hasan, President of the the Virginia Student Environmental Coalition. “Dominion’s plans to build the Atlantic Coast Pipeline and expand fossil fuel infrastructure show the company’s negligence towards this global challenge.”

“Dominion’s dirty energy choices and political dealings with ALEC are not in the best interest of the citizens of Virginia,” said Kendyl Crawford, Conservation Program Coordinator with Virginia Sierra Club. “Dominion needs to get serious about addressing climate change. According to its own projections, Dominion’s over reliance on natural gas will increase its climate changing carbon pollution 39% by 2028.”

“We’re frustrated by Dominion’s failure to take strong action on climate change,” said Charlie Spatz, Statewide Field Organizer with Chesapeake Climate Action Network. “Dominion’s spending billions of dollars to expand ‘fracked’ gas infrastructure, yet when it comes to renewable energy the company has very little to show. In recent weeks Dominion announced it would be indefinitely delaying its offshore wind project. That’s not the kind of leadership we need to get us on track to solve the climate crisis.”

“It’s important for people in Cove Point to stand with people in Richmond, Nelson County, Myersville and everywhere else Dominion is running roughshod over people’s lives,” said Donny Williams of the We Are Cove Point coalition. “Dominion is already more than six months behind schedule in constructing its mammoth LNG export terminal in Cove Point thanks to the people standing up for their communities to stop it. We’re here today to make it as clear as possible that we simply will not allow the company to continue putting profits before our well-being – risking many of our lives in the process.”

Del. Mark Cole (R) Working Very Hard to Be the Most Far-Right Extreme Member of the Virginia House of Delegates (A "parental rights" amendment, a bill that would wipe out any legislation passed by the VA House of Delegates in 2021, etc.) https://bluevirginia.us/2020/12/del-mark-cole-r-working-very-hard-to-be-the-most-far-right-extreme-member-of-the-virginia-house-of-delegates