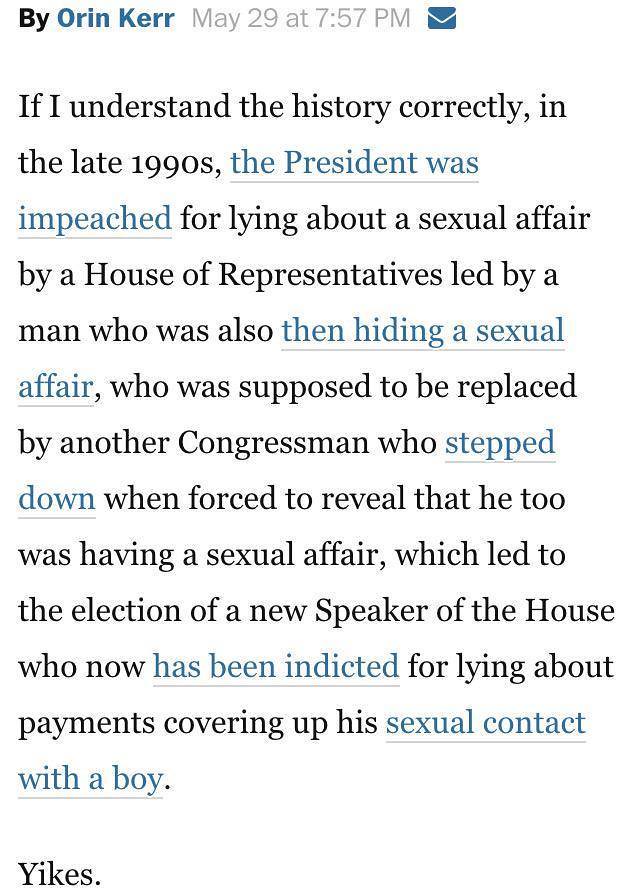 As I read article after article about former House Speaker Dennis Hastert, including the one by the Washington Post’s Orin Kerr that I’ve highlighted, it’s really bringing back memories — bad ones — of that crazed Republican witch hunt against President Bill Clinton. It’s also reinforcing for me why it would be such a bad idea for any Democrat in the Virginia 10th State Senate district Democratic primary on June 9 to vote for Dan Gecker, who was an important behind-the-scenes figure in said impeachement hearings. A few “highlights” of Gecker’s involvement in the attempt to impeach and convict President Clinton over a consensual sex act include the following.

*”During the Clinton impeachment trials, Dan Gecker urged Senator Collins of Maine to vote to impeach Bill Clinton. [Portland Press Herald, 9/24/00]” Also see The Breach for more on this one.

*”In a 2008 interview with Style Weekly, Gecker said he ‘Yes, I believe it’ that Bill and Hillary Clinton had pursued an agenda against his client (Clinton accuser, Kathleen Willey) that included threats, tire slashing and killing her cat.”

*Also see Publisher Says Lawyer Pursued Book Deal For Clinton Accuser, which describes how Gecker “tried to persuade [a book publisher] over a two-month period to buy the former White House volunteer’s life story, including her account of an alleged unwelcome sexual advance in the Oval Office.”

*Then there’s G.O.P. Senators Meet Secretly With Prosecutors on Witnesses, which notes that “two of the House [Clinton impeachment hearings] managers, Asa Hutchinson of Arkansas and Lindsey Graham of South Carolina, met on Monday with Ms. Willey, a former White House volunteer, and her lawyer, Dan Gecker, to discuss the possibility of her appearing as a witness, said a Republican aide and another person familiar with the case.”

*Finally, for more on the damage that the impeachment witch hunt did to people, see Daughter Blames Lewinsky Scandal for Mother’s Failing Kidneys, about “Julie Hiatt Steele, a former Midlothian resident and friend of Willey’s who was the only person indicted by special prosecutor Kenneth W. Starr in the fallout from the Lewinsky affair.” According to Hiatt Steele’s daughter, Liza Steele:

“My mother really was the victim in that whole scenario,” she says. She can’t prove it, but the daughter believes the invasion of privacy and emotional tumult of the Willey ordeal contributed to her mother’s kidney failure: “It really took a severe toll on her,” she says. “The stress of that is a process.”

Finally, check out Liza Steele’s lengthy comment (I’ve posted it on the “flip”) in the 2008 article, “Kathleen’s crusade” for fascinating background on how “Kathleen [Willey]’s ‘crusade’ conveniently fails to acknowledge the largest of her grope-related lies, which resulted for my mother, Julie Hiatt Steele, in a January 1999, four-count federal indictment by O.I.C. prosecutor Ken Starr, a situation which ultimately led to my mother’s loss of the home she had owned for over twenty years.” And yes, Dan Gecker was involved in all this, as Kathleen Willey’s close friend, advisor and lawyer. Lovely, huh?

Regarding Jason Roop’s February 21, 2008, story, “Kathleen’s Crusade,” let us observe that Kathleen’s “crusade” conveniently fails to acknowledge the largest of her grope-related lies, which resulted for my mother, Julie Hiatt Steele, in a January 1999, four-count federal indictment by O.I.C. prosecutor Ken Starr, a situation which ultimately led to my mother’s loss of the home she had owned for over twenty years. And let us not fail to understand that Kathleen did not leave out that lie because it represented a true sequence of events that she matter-of-factly forgot; rather, let us understand that she left out that lie because it was a lie she told long ago, and, in the manner of one who lies, forgot to remember.

I spent my early teen years watching Kathleen Willey roll up in the driveway of my mother’s house in a black 911 Porsche, wearing skirts that were shorter than the shorts I wore to gym class, and with the requisite high heels and haughty attitude. Given that, the idea that she came crying to my mother – which is the lie she claimed that eventually led to my mother’s indictment – on the backside of being groped by her then-chum Bill Clinton, was not, in the most basic sense, believable. Indeed, by the time she made that claim, Kathleen Willey had spent many years presenting herself as the sort of woman who invites a good grope and can handle one that she doesn’t. To that, it is worth noting that Kathleen Willey and my mother would never have known each other at all had Kathleen and her late husband, Ed Willey, not reneged on the sale of their house at 2320 Castlebridge Road, in Chesterfield County, to my parents, back in 1978, even as the movers were loading the truck to move us from Kansas City to Richmond. Regrettably, my mother subsequently allowed Kathleen to become part of her life, partially because they were both stay-at-home mothers with children of similar ages, but in larger part because my mother is the occasional champion of a misguided soul.

That’s right, in detailing her “crusade,” Kathleen conveniently failed to admit that in the spring of 1997 she asked my mother, suddenly, and à propos of nothing, to confirm for reporter Michael Isikoff of Newsweek Magazine that she, Kathleen, had come, distraught, to my mother’s house immediately after being groped by president Bill Clinton at the White House on November 29, 1993. Kathleen assured my mother that this statement would be “off the record” and that she would “explain later,” and so in the manner of an obliging and trusting friend, my mother reluctantly did as she was asked. In July of 1997, upon learning that Isikoff would go to press with the statement, my mother sought out Isikoff and told him that she could not let him do that, because what Kathleen had asked her to say had not, in fact, happened. It was this combination of obliging a friend and clarifying the truth that found my mother facing Ken Starr’s four-count federal indictment.

Mr. Roop’s version of the events of November 29, 1993 obviously came from the 1995 civil court sworn testimony version of Kathleen’s ever-changing story, wherein she claims to have gone to Ed’s office and home to bed after a day in Washington – testimony that, ironically, includes neither mention of an upsetting presidential grope nor the additional lie that she had gone to my mother’s house on the heels of one.

Imagine my mother facing a four-count federal indictment and losing her home because she obliged a friend who later claimed that she herself didn’t remember what happened and was relying on my mother – the very person tasked with lying on the very same subject – for the “facts.” In the end, and without even presenting a defense, my mother was not convicted of the obstruction of justice and false statements charges brought against her by Kathleen Willey’s immorality and indiscretion, but please, could we not hear anything more about Kathleen and the injustice she has faced?

Sen. @MarkWarner on the Integrity of Our Elections (Warner: Trump "should not be aiding and abetting foreign adversaries who are working to sow doubts about the legitimacy of the American election system") https://bluevirginia.us/2020/09/sen-mark-warner-on-the-integrity-of-our-elections