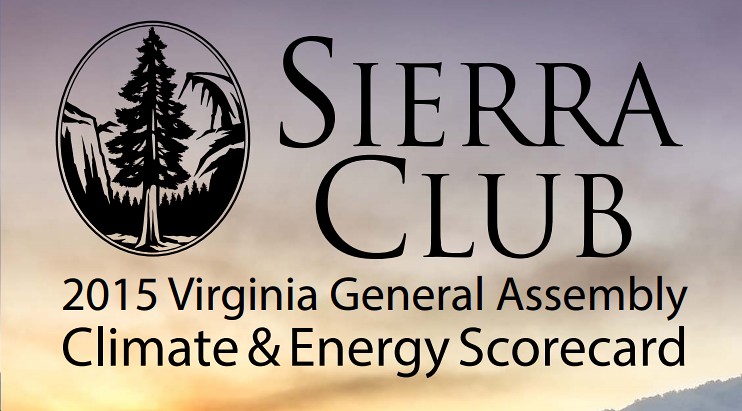 The Virginia Sierra Club scorecard for 2015 is now available, and sadly, an issue that should equally concern all of us – protecting the environment we all inhabit – continues to show a lamentable, absurd, frustrating partisan divide. For instance, courtesy of Ivy Main’s Power for the People VA blog, note that every single Senator and Delegate receiving a perfect Sierra Club environmental score is a…yep, Democrat.

Again, I take no real pleasure in that list (although THANK YOU to everyone who voted for the environment, not for the polluters, in 2015!). The fact is, Republicans and Democrats breath the air and drink the water equally, so there really should be no partisan divide at all when it comes to the environment. Also, even if you’re utterly cynical about it, the fact is that BOTH parties receive a lot of money from Dominion Power and other fossil fuel interests (although no doubt Republicans receive even more dirty fuel dollars than Democrats do), so again that should cut against such a stark partisan divide as we see in Virginia. Yet here we are, even as the science is screaming at us about the enormous environmental challenges we ALL face, with this stark partisan divide on what SHOULD be an utterly non-partisan issue.

In that context, you’ll understand why I find it sad and outrageous to see the Republican Party — formerly the party of conservationist Teddy Roosevelt and even Richard Nixon, who did some excellent things for the environment — become an earth-pillaging, Koch-sucking disaster. With that, here are the worst of the worst in the Virginia General Assembly, the Republicans who received “D” or “F” grades from the Sierra Club.

Oh yeah, and let’s not forget two “Democrats”: the godawful Johnny Joannou (“F” grade) and also Matthew James (“D” grade). No excuses there, but at least in Joannou’s case, he has an opponent (Steve Heretick), who hopefully will beat him on June 9! As for the rest of the “D” and “F” Senators and Delegates, polling clearly shows that they are wildly out of step with their constituents, large percentages of whom (of both parties) support   switching to clean energy and reducing carbon pollution.  The question is, why aren’t their supposed “representatives” listening to their constituents?!?

Photos: Virginia Voters Start the Process of Turning Our Country Around From the Trump Disaster

Sen. @MarkWarner is voter #397 at Alexandria city hall...then goes to celebrate with a "tuna melt" with extra mayo? LOL https://bluevirginia.us/2020/09/photos-virginia-voters-start-the-process-of-turning-our-country-around-from-the-trump-disaster