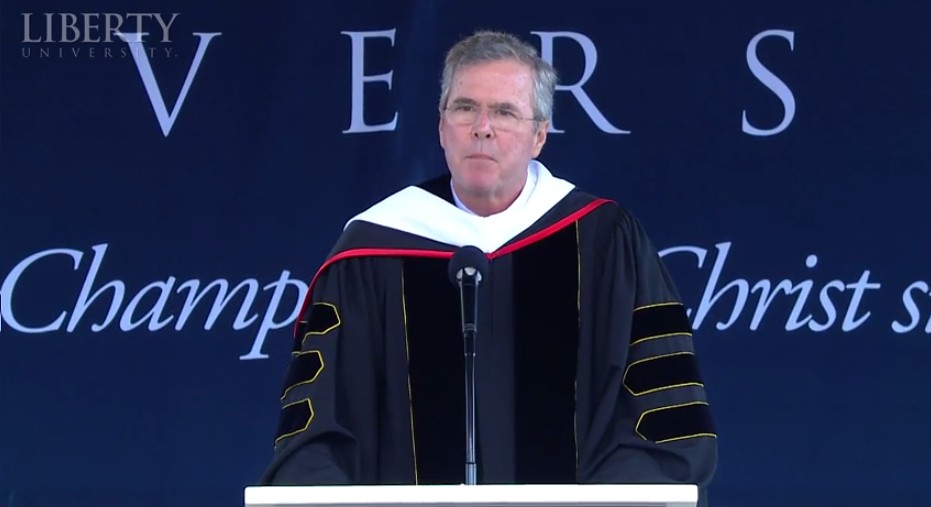 Jeb Bush To Remind Everyone Of How Awesome The Indiana Discrimination Law Is In Liberty University Speech
Jeb Bush will take the stage at Liberty University today to unabashedly pander to the evangelical right-wing, the backbone of today's Republican Party. Yesterday, excerpts of his speech were released, showing that Jeb will focus on defending extremely socially conservative policies — including the Indiana right-to-discriminate law.
Jeb has made his priorities clear from the get-go. He was the first GOP presidential candidate to defend the anti-LGBT law, and today will blame "coercive federal power" for getting in the way of those who wish to discriminate. But that's not all: he'll reference his staunch opposition to a woman's right to choose. As Governor, he infamously intervened in controversial abortion cases, even trying to force a 13-year-old who was raped to carry her pregnancy to term.
In contrast, Virginians were proud to support Governor McAuliffe when he took swift action to show that Indiana-style discrimination is unwelcome in the Commonwealth. He also prevented the Board of Health from being an attack on women's healthcare. Sadly, it looks like Jeb would rather join the likes of radical conservative crusaders Senator Dick Black and Delegate Bob Marshall, who have consistently stood in the way of equality and choice in Virginia.

"Jeb Bush will not win over any Virginia voters with his close-minded pandering to the right wing," said Morgan Finkelstein, press secretary for the Democratic Party of Virginia. "By supporting the Indiana discrimination law and attacking women's reproductive rights, Bush places himself firmly at odds with Virginia values. Virginians want a president who will ensure opportunity for all, not one who would protect discrimination at any cost."