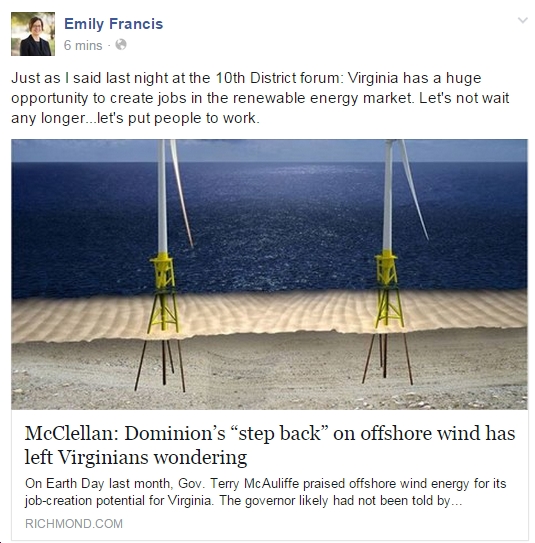 Thanks to strong progressive, environmentalist and 10th State Senate District candidate Emily Francis for highlighting this op-ed in today’s RTD by Stephanie McClellan, Ph.D., “director of Special Initiatives on Offshore Wind at the University of Delaware” and “former director of strategic initiatives and outreach for the Atlantic Wind Connection.” Here’s an excerpt:

On Earth Day last month, Gov. Terry McAuliffe praised offshore wind energy for its job-creation potential for Virginia. The governor likely had not been told by Dominion Power that 24 hours later the utility would decide to “take a step back” from the much-touted offshore wind demonstration project based on a single bid for the project’s construction.

McAuliffe should feel validated, not discouraged, as the facts are on his side. Dominion’s decision should be seen as the regulated monopoly utility’s need for outside expertise from those with experience in competitive offshore wind markets, rather than an ominous bellwether of offshore wind’s future here.

…Virginia has a federally designated zone to develop this new industry. Its estimated potential is two gigawatts of power, enough to power 500,000 homes and create thousands of jobs in the process. Yet, there is no clear development plan or timeline available to the public, a fact that hinders market participation from the field of companies that want to drive the industry forward.

Our research shows costs can be cut by 10 percent to 20 percent just by creating competition. In addition, there was only one complete bid for this demonstration project – a situation that is almost guaranteed to result in an uncompetitive price.

There’s a viable path to seize the opportunity in front of us, and the governor is right to see it and push for it. The sooner Dominion can draw on experienced experts to chart a clear path forward, the sooner Virginians can reap the significant economic benefits that offshore wind energy offers.

The problem, as usual, is out-of-control, state-protected monopoly, Dominion Virginia Power, and its utter disrespect for both the environment and the people of Virginia. The question is, when will Virginia’s legislators get the courage to tell Dominion where to shove its dirty money, and to pass legislation that forces this dirty energy dinosaur to get with the 21st century? And no, given that our entire govenrment is “captured” (aka, “corrupted”) by companies like Dominion, I’m not holding my breath…

P.S. Emily Francis is absoulety right: “Virginia has a huge opportunity to create jobs in the renewable energy market. Let’s not wait any longer…let’s put people to work.”