Yesterday, we saw a particularly heinous example of the Washington Post’s fatal shortcomings, as they completely botched a major story, uncritically regurgitating outrageous disnformation from an obviously biased source, strongly implying that Freddie Gray somehow severed his own spine, while shackled in a police van. I mean, let’s just say, anyone who believed that Big Lie should never be listened to about anything, ever again.

Anyway, here’s the Washington (Com)Post today, with the REAL story of what happened (obvoius to anyone with half a brain for a long time now). 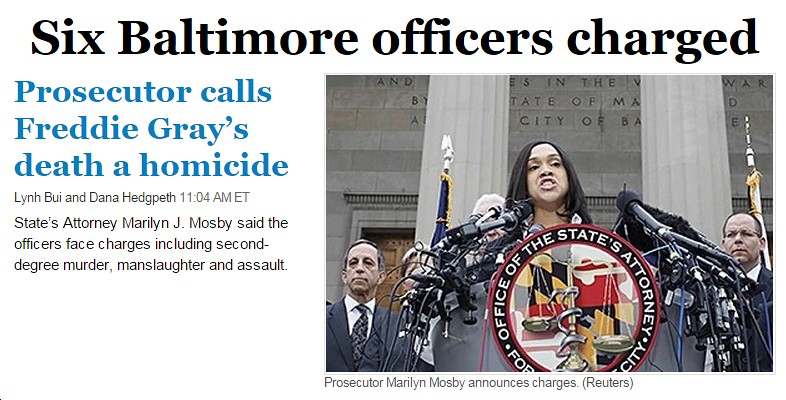 Now, where’s the front-page, above-the-fold call by the Post for heads to roll among reporters and editors who had the Freddie-Gray-severed-his-own-spine story up all day yesterday? You know, like when the Post went ape**** on Rolling Stone for their journalistic malpractice in the UVA “gang rape” story, or when the Post went ape**** over Brian Williams (but not Bill O’LIElly) for making stuff up, etc. Hmmmm…perhaps the (Com)Post’s new motto should be: “We often f*** up but we never OWN up?”

P.S. Fox, CNN and others also fit that motto, except that with Fox (and to an extent CNN), I would never expect truth or accuracy. I had hoped for better from the Post, but apparently they’re no better than Fox, CNN, etc.