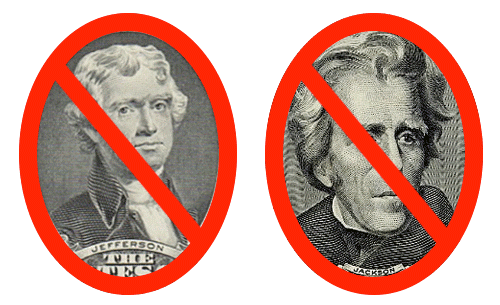 With another successful Arlington County Democratic Committee Jefferson-Jackson (“JJ”) Dinner in the books and the Democratic Party of Virginia JJ with Hilary Clinton right around the corner, it’s time to have a hard discussion about why we here in Virginia haven’t done away with this event’s terrible, reproachable name.  For those not in the know, “Jefferson-Jackson Day” is the traditional name for the annual fundraising dinner held by state and local Democratic Party organizations throughout the United States, usually in the springtime.  The name of the JJ Dinner honors Presidents Thomas Jefferson, who established the original Democratic-Republican Party, and Andrew Jackson, who founded the modern day Democratic Party and was the first Democrat elected President.  Neither, however, embodied modern Democratic values.

Jefferson’s mixed feelings about slavery, which included a failure to liberate his own slaves and a belief that slaves were too primitive to handle full manumission, are well-documented.  Jackson has a far more reprehensible history as an overtly pro-slavery racist.  Jackson’s first major legislative initiative after being elected President was to effectuate the mass removal of Native Americans from their ancestral lands through forced marches that resulted in thousands of deaths—a genocide we now know as the Trail of Tears.  And, Jackson not only owned hundreds of slaves, but he sought to prohibit abolitionists from mailing informative tracts opposing slavery, tabled abolitionist activity in Congress, and was himself a slave trader.  A more detailed rundown of Jackson’s shameful legacy can be found in Steve Inskeep’s new book, Jacksonland, and in this Salon piece from 2013.  Indeed, Jackson’s disgusting legacy has been all over the news lately with the introduction in Congress of the “Put a Woman on the Twenty Act” and the corresponding “Women on $20s” campaign.  Any way you slice it, Jackson is no one we as Democrats should praise.

Virginia Democrats have long-celebrated our Commonwealth’s move away from its racist past as a stronghold of slavery and the capitol of the Confederacy.  The day after President Barack Obama became the first Democratic Presidential candidate to carry Virginia in forty years, then-Governor Tim Kaine declared proudly that “Old Virginny is dead.”  Kaine’s promise of a new Virginia is even more relevant and important in 2015, as recent terrible events remind us that we are not a post-racial America, but rather are struggling to ensure safety and respect for all our people.  It is even more important now that Virginia Democrats renounce any celebration of racism and violence in our official events.  Changing the name of the JJ Dinner would symbolize our renewed commitment as Virginia Democrats to fulfill Tim Kaine's promise and reject Virginia's racist past.

There are countless praiseworthy Democrats featured in the history of Virginia and the United States from whom we can draw inspiration while honoring their achievements.  Renaming the JJ Dinner is both the right thing to do and a great opportunity for DPVA and local parties to create their own branding around the event.  For positive role models in this endeavor, we need look no further than the 8th District Democratic Committee, which chose the inspiring figures of Senator Robert F. Kennedy and the Rev. Martin Luther King, Jr. as the honorees of their annual fundraising dinner.  And, in 2014, after multiple local parties renamed their events, the Florida state Democratic Party also renamed their JJ Dinner.  Making such a change would send the right message about what our Party represents and help generate excitement among all Democrats who care about the future of our Commonwealth and our nation.

When I call on DPVA and local parties throughout the Commonwealth to make this change, I know full well what I’m asking:  I chaired the Arlington County JJ Dinner for five years.  Let’s make this the last year that we, as Virginia Democrats, honor the shameful legacy of slavery and oppression.