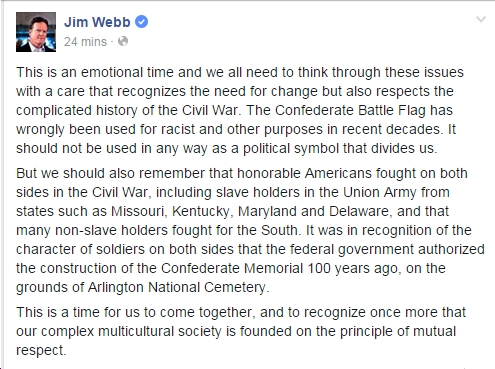 Just days after the murder of nine African Americans attending church by a Confederacy-loving white supremacist, the Confederate flag is coming down fast across the United States, even in places like Alabama and possibly South Carolina. It’s also coming off shelves at America’s leading merchants and the internet. Heck, it’s even gotten at least some 2016 Republican presidential candidates to call for the flag to come down. On the 2016 Democratic presidential side, you’d think this would not be a tough call, and indeed it hasn’t been for Martin O’Malley, Hillary Clinton, Bernie Sanders and Lincoln Chafee.

The one exception on the Democratic side, of course, is our own Jim Webb, who many of us strongly supported for U.S. Senate in 2006. That’s not particularly surprising, of course, given Webb’s long history of “contrarian stances on the Confederacy.” It’s also not surprising given that the person who is de facto running his campaign, Dave “Mudcat” Saunders, happens toi be “an even more ardent fan and defender of the Confederacy” who “sleeps under a Rebel-flag quilt, and when challenged on such matters he has invited his inquisitors to ‘kiss my Rebel ass.'” Given all that, we certainly shouldn’t be surprised by Webb’s position on the Confederate flag, even if we strongly disagree with it (which I most certainly do).

The big question for Webb, though, is how his statement is playing among potential Democratic primary voters, and also more broadly. One thing’s for sure; it’s certainly getting him a great deal of attention for the first time in his exploratory “campaign” for president. For instance, I checked Twitter not too long ago, and Jim Webb was the #4 “trending topic.” Webb’s also the top subject at Memeorandum, a widely-read political news aggregator. Finally, on Webb’s Facebook page, we’re now up to 1,090 “likes,” 506 comments and 472 “shares.” Not bad for a page that has been relatively quiet unti now. Except for one problem: the comments on Webb’s Facebook post are generally scathing, as are the comments on Twitter, as are most Democratic-leaning blog posts. Here’s a short sampler.

*The top-rated comment on Webb’s FB page: “Honorable people fight on the both sides of every war. It’s the casus belli that matters. Honoring the “white man’s flag” (their words, not mine) excludes millions of black slaves who lived in the antebellum south and would have opposed war and slavery if they’d been asked. Their humanity was ignored then, and honoring confederates ignores their humanity today.”

*The second-highest-rated comment on Webb’s FB page: “…Let the flags of the confederacy be displayed in museums, CSA burial grounds, battlefields, and private homes and businesses; but not alongside the American flag at a capitol that is supposed to represent all Americans and citizens of those states.”

*The third-highest-rated comment on Webb’s FB page: “Mr. Webb, as an active duty Marine I’d love to support you. But as many others have pointed out here, the complicated history and honor that may have been carried in the hearts of individual soldiers does not excuse the wrongness of the white supremacist society that they fought for and that their battle flag came to symbolize. I am deeply disappointed in your position on this matter.”

*Progressive blog Hulabaloo: “It’s not really complicated at all. People like Webb just want to pretend it is. The flag is, and always has been, a ‘political symbol that divides us.‘ It has no place  in public in a decent society in 2015 — it is a historical artifact that should be studied for what it has represented — and not a damn bit of it was good.”

That’s just a sample of what I’m seeing online. I also heard from several 2006 Webb campaign alums today. One of them said this is a “huge problem” for Webb and just seemed utterly disgusted. Another said, “so pig headed…hasn’t changed a bit!” And a strong Webb supporter from 2006 told me, “Mudcat is not the best adviser any more for these things, if he ever really was. To me, it’s pretty unequivocal that the flag is racist.”

Bottom line: In the end, Webb’s 2016 presidential “exploratory” campaign finally get a bunch of attention today, just not in any way that will help him have the slightest shot at winning the Democratic nomination.