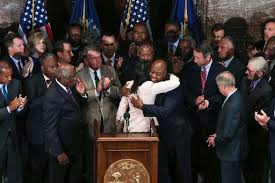 This past week has been one of those special times that prove how unpredictable the flow of events can be. It is an important realization, in our dark era in America, to recognize that our sense of what’s possible is likely way too constricted. It tells us that it is never appropriate to yield entirely to despair because we “know” that there’s no way things can turn around and get better.

I’m talking about the amazing speed with which, in the past several days, America – most definitely including many leaders on the American right – has been turning away from some of the long-celebrated emblems of the Confederate States of America.

The Confederate Battle Flag is being rejected in some places that have long held out for this supposedly guiltless icon of that American region that was willing to fight a Civil War to defend the rights of white people to own and exploit black people and that, two generations ago, resisted with defiant passion being compelled to abandon the regime of Jim Crow by which the descendants of those black slaves were terrorized and oppressed.

(My wife went to Nathan Bedford Forrest High School in Jacksonville, Florida-and a couple of years ago her white classmates greatly resented the school board’s decision to abandon that name, even though the student body was by then majority black.)

In Kentucky, there’s talk of removing a statue of the president of the Confederacy, Jefferson Davis – after whom so much in the South is named, including the junior high school my wife went to, and a highway in the Arlington area).

As the New York Times article put it in a headline, “Calls to Drop Confederate Emblems Spread Nationwide”.

Who would have imagined, just a week and a half ago. that such a wave of transformation was possible.

Of course, that was before the grotesque and heart-rending murder, by a young racist white man, of nine black churchgoers, attending a Bible class in a historic African-American Church in Charleston, South Carolina.

But even given such an event, I would never have predicted this kind of reaction.

Here we are, in a time when the politics of the right have been shameless for years, when one disgrace after another has failed to call the Republicans to the better angels of their nature. Why — after all the lies, all the cruelties, all the thefts of power and wealth, all the degradation they have inflicted on our nation-has this event triggered so profound a change, almost like those gratifying but unbelievable Hollywood movie redemption stories.

And we need to recognize how core to today’s Republican Party is the spirit of that Confederacy whose icons are now being repudiated.

Almost two years ago, I published here a brief series  under the title, “The Spirit That Drove Us to Civil War is Back.” (The striking evidence of the re-emergence of that spirit in today’s Republican Party is also one of the themes woven into my new book WHAT WE’RE UP AGAINST. The parallels include, but go way beyond, the obvious-like the assertion of the right of nullification (asserting the right of states to disregard federal laws they don’t like), like the racism, like even some talk of secession.)

So a movement away from, say, the Stars and Bars – a movement toward recognizing the long-denied meaning of that flag as a symbol of racial terrorism – is not a trivial thing.

After all the other killings of defenseless, unarmed blacks by whites in recent years, after all the other terrible things that have elicited no apologies, no admission of the deeply wrong things the right has done since George W. Bush took office, and through the obstructionism of the Obama era, why this sudden and uncharacteristic willingness to back away and change directions?

What are the crucial elements in this picture that sparked this surprising scenario?

1) If the murders had been committed in a shopping center parking lot, instead of in a church, would this be happening?

2) If the nine black people had been of low status rather than some of the pillars of the community, would we be seeing this same transformation?

3) If there were no pictures of the murderer posing with the Confederate Battle Flag, would the flag be coming down from state houses and off license plates?

4) If the some of the members of the families of the victim had not expressed forgiveness of their loved-one’s murderer, would these leaders on the right been moved to acknowledge how injurious has been the official endorsement of the symbols of racial oppression?

(This remarkable act of forgiveness was emphasized on Tuesday by Senator Lindsey Graham, who spoke most movingly – and appeared deeply human – in advocating the removal of the Confederate Battle flag from South Carolina’s statehouse.)

5) Was there anything else happening beneath the surface of our politics before this terrible crime that readied the system for something like this to be catalyzed? (Even in retrospect, I can’t see anything like that.)

I wish I knew.

This isn’t a Hollywood movie, I recognize. Happy endings are fun to watch, but this story will not end here. Surely many very fundamental things have not changed, and the changes that are happening may prove temporary.

But might this astonishing development — in a Republican political culture that has never been able to admit being wrong about anything, while being wrong about almost everything in recent years – may be the harbinger of other positive changes to come?

We can hope. But I don’t expect that.

But then, as these recent days have shown, the complexity and subtlety of many of the forces at work in the human world does not allow one to know for sure just what might happen.