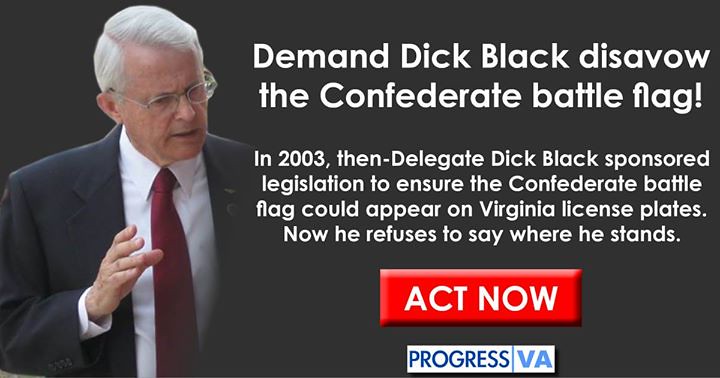 “In 2003, another state lawmaker from Loudoun penned legislation on the issue, taking a different stance from May. Then-Del. Dick Black (R) introduced legislation removing 'the prohibition on display of the organization's logo on Sons of Confederate Veterans special license plates.'”

Dick Black went above and beyond to make sure that the Sons of Confederate Veterans had extra-special permission to slap their flag on Virginia license plates. A federal court ruling had already made the practice legal, but Black needed a specific allowance for the Confederate flag to be enshrined in the Code of Virginia. Yet, strangely, he's been silent on the matter now that the stars and bars are no longer in vogue.

“Since Dick Black was so eager to go out on a limb for the Sons of Confederate Veterans, how does he feel about their cause now?” said Morgan Finkelstein, press secretary for the Democratic Party of Virginia. “He went above and beyond to ensure the Confederate flag would be on Virginia license plates, so it's curious that he's still not said anything on the current issue.”