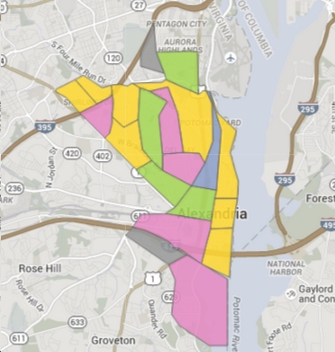 Over at VPAP, they’ve got maps showing precinct-by-precinct results for Tuesday’s Virginia General Assembly elections. The first one I looked at was the 45th House of Delegates district, in part because I just talked to Mark Levine last night (at the ACDC Democratic unity event in Arlington). A few things jumped out at me from this map.

*It’s interesting to compare the 45th results to the Alexandria Mayor’s race. Of Levine’s top precincts: Bill Euille won Ladrey Senior Building; Kerry Donley won Blessed Sacrament Church; Allison Silberberg won Agudas Achim, Lyles Crouch and City Hall by huge margins. So, there was some overlap on Tuesday between Silberberg and Levine voters, although certainly Levine did well in precincts Silberberg didn’t win as well (e.g., Lee Center, which Euille won by a wide margin and Levine was basically in a three-way tie for first with Jakopic and Fifer).

*The number of precincts (not counting absentee) won by each candidate were: 9 for Levine, 5 for Jakopic, 4 for Fifer, 1 for Tong and none for Altenburg. Even in the ones that Levine didn’t win, he generally held his own, certainly didn’t get blown out. That’s a winning formula right there.

Anyway, those are just a few observations that jumped out at me. I’m sure I missed interesting stuff, so feel free to comment and let us all know. Thanks.