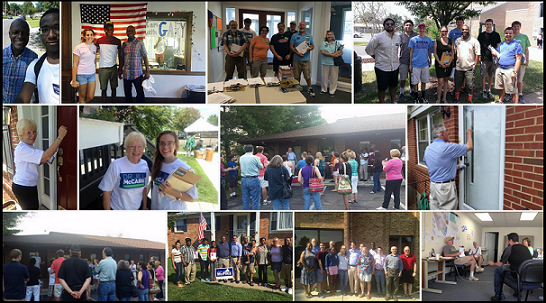 Virginia is inside of 100 days until voters head to the polls for all 140 seats in the General Assembly. To mark the occasion, Virginia Democrats participated in a Weekend of Action, canvassing thousands of doors across the Commonwealth. This enthusiasm is one of the many assets Democrats have moving into the fall. Here's the lay of the land for the next 100 days:
“In just 100 days, voters across Virginia will face a choice. Elect Democrats who will partner with our Governor to create jobs and build a new Virginia economy — or elect extremist Republicans who are distracted by divisive partisan battles or in the pockets of special interests,” said Democratic Party of Virginia Chairwoman Susan Swecker. “A Democratic State Senate will work to create jobs, expand health care for all, take commonsense steps to make communities safer, and ensure every Virginia woman receives equal pay for equal work.”

Photos from the Weekend of Action HERE, photo credit Democratic Party of Virginia.

Audio: Amanda Chase Says Allowing People To Be in Legislative Black Caucus Based On Skin Color Is “government-sponsored racism”

Interesting (and revealing) to see two of the most powerful, politically well-connected companies in Virginia (@McGuireWoodsLLP and @DominionEnergy - both hq'ed in Richmond) on this list... https://bluevirginia.us/2021/04/monday-news-dear-media-lets-treat-the-climate-emergency-like-the-pandemic-emergency-democrats-prepare-to-tackle-bidens-sweeping-spending-package-the-gop-is-now-the-part#comment-5339990607 h/t @JuddLegum cc: @pwcdanica