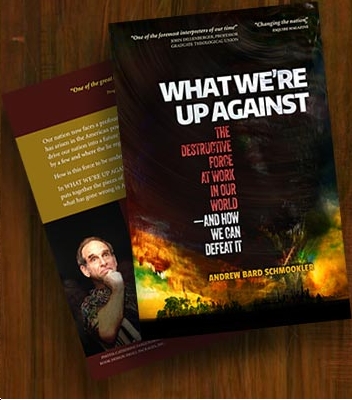 Blue Virginia readers are, presumably highly familiar with Andy Schmookler’s fundamental thesis about America today: 1) that the “political right – and its political arm, the Republican Party – has become an extraordinarly destructive force in the American body politic”; and 2) that “the political left…and its political arm, the Democratic Party, has shown extraodinary weakness in the face of the threat posed to the nation by that destructive force.” Andy has also written extensively on this subject at The Huffington Post, Daily Kos, and elsewhere. Now, Andy skillfully pulls it all together into highly readable paperback book form, in What We’re Up Against: The Destructive Force at Work in Our World – And How We Can Defeat It. Andy sent me an advance, review copy, which I’ve just finished reading. Other than strongly recommending that people  read it, here are a few thoughts and questions in no particular order.

*I’m not a huge fan of the word “evil,” as I believe it’s has far too much baggage – religious, etc. – and can be offputting (although Andy does a strong job or arguing why it’s an important and necessary word to use, not in a religious but in a secular context). Personally, perhaps given my background in social psychology and the broader social sciences, I prefer Andy’s discussion of the right in America as a force for “brokenness” – dishonesty, environmental destruction, inequality, conflict, hostility to knowledge and empiricism, an increasingly unrestrained corporate takeover of our (soon-to-be-former?) democracy, etc.

*Andy’s approach is highly intellectual (he contrasts it with the emotional approach embodied in the book, “Uncle Tom’s Cabin,” which can be argued stirred Northerners to increased anti-slavery activism and even helped trigger the Civil War), although well written and suffused with passionate intensity, yet I do wonder if this book will find an audience in liberal America (I hope it does; it certainly will NOT be read by those on the right). I went back and looked through Andy’s postings at The Huffington Post and Daily Kos, in particular, and found very little discussion stimulated. Perhaps even worse, as Andy himself notes in his book, what discussion DID occur wasn’t really on point, “almost always ignored the larger assertions within each piece and focused instead on the most immediate and concrete points,” simply didn’t light the “fire” Andy was aiming to ignite. The questions are: a) why was that; and b) is there any chance of this situation changing? I don’t really have the answers to either of those questions.

*Andy certainly takes a shot at what he calls the “abdication of the press,” arguing that the media has ignored “one of the biggest stories in American history” – “the rise to power of a force more consistently destructive and dishonest than anything seen before at center state of American politics (except perhaps for the decade leading up to the Civil War).” I wish Andy had delved more into this issue, for instance looking at why the media has abdicated its role, resorting instead to mindless, cowardly, and ultimately flat-out false “both sides” “reporting” – because I think it’s extremely important as well as a continuing, serious problem (e.g., just this morning Chuck Todd allowed vicious racist, anti-Semite and homophobe Pat Buchanan on his show –for the “conservative” point of view, presumably? Still, WTF?).

*Instead, Andy spends a great deal of time and effort in this book laying out the concepts of “wholeness,” “brokenness,” “evil as a force,” the Republican Party as a “pure case” of that “evil,” the “weakening of the cultural ‘immune system’ that has allowed evil to advance,” the “failure of the rest of the American body politics…to respond appropriately,” etc.

*While Andy believes to his core that the Republican Party and the “evil force” it represents must be firmly and relentlessly confronted, he argues that he does not – and the rest of us should not – have any “malice” towards the “broken” individuals in that party, but more a feeling of “compassion” towards them, a spirit of “with malice towards none,” quoting President Lincoln from his second inaugural address.

*As for America’s liberals, the people who Andy aims his book at, I sense a combination of frustration, exasperation and a bit of hope that with the right message, presumably delivered by the right messenger in an effective way, liberal Americans can be roused to action against the “evil force.” For now, though, Andy laments that liberal Americans simply are “blind” (willfully or otherwise) to the evil; the problem being, of course, that “can’t hit what you can’t (or won’t) see,” as Andy puts it.

*Andy muses that the ’60s counterculture and revolution against “society’s moral structures” may have been well-intentioned, but that it ultimately “led to disastrous results,” including a harsh reactionary response by those on “the other side of the cultural divide.” It’s an interesting argument, one I’m not sure I’ve heard made previously by someone of the “left” (broadly speaking), but it does ring true that the rapid social, cultural, economic and other changes America has seen over the past few decades has been deeply unsettling in many ways, even if it’s been for the better in important areas (e.g., women gaining a lot more power, equality for gay Americans, the civil rights movement, the environmental movement).

*The counter-reaction by the political right to the rapid changes in American “morality” has, no question, been harsh in many cases. Right here in Virginia, I present to you the 2013 far-far-far-right-wing “Extreme Team” of Ken Cuccinelli, E.W. Jackson and Mark Obenshain as Exhibit A of where this can lead. I’d also present the current 2016 Republican presidential field, which is filled with people far further to the right – and also apparently without any “third rails” they are unwilling to touch – than the Republican Party of the 1970s, 1980s (I mean, Reagan today would be considered a “RINO” by a lot of these folks) and even into the 1990s, although certainly the 1994 Congressional elections brought to power Newt Gingrich and other truly ugly exemplars of the “brokenness” Andy talks about in his book. The results of that election – and also the 2000 (s)election of George W. Bush, the disastrous 2010 and 2014 mid-term elections, and the takeover of many state legislatures by extreme, right-wing, corporatist forces – has not been pretty.

*Andy makes several references to fictional characters responding to “evil” forces — Sully in “Avatar,” Luke Skywalker in “Star Wars,” and Frodo in “Lord of the Rings.” For me, the latter is by far the most resonant (and relevant), as Frodo was simply an “ordinary hobbit,” living comfortably in the Shire (just as most liberals are fairly comfortable in suburban America), not looking to be battling dark and menacing forces but ultimately courageous enough to do so when he sees there’s no other (good) choice (other than letting the world fall under Sauron’s reign of terror). So...how many “Frodos” are out there, and how many “Gandalfs” to open their eyes to the forces arrayed against everything they hold dear? That’s what I’m deeply unsure about.

*The bottom line question, again, is whether a holistic, comprehensive, wide-ranging, integrative force, such as  Andy’s new book strives to be (and largely succeeds) can rouse liberals to action, possibly even awaken some of the “good people” among conservatives to how they’re being manipulated by wealthy, powerful interests. After reading Andy’s book – as thoughtful and well-argued as it is (not surprising by someone with the decades of study Andy has undertaken, as well as a tremendous ability to synthesize vast amounts of information across disciplines) – I remain deeply skeptical, even as I hope to be proven wrong. I’d be interested what others think, and encourage Blue Virginia readers to check out the book and post your thoughts. Thanks.

P.S. One more point is that by writing stuff like this, one runs the risk of being marginalized by the “very serious people” who insist on denying that the Republican Party is extreme, radical, etc. For instance, see the case of Thomas Mann and Norman Ornstein, who called out just that (“The GOP has become an insurgent outlier in American politics. It is ideologically extreme; scornful of compromise; unmoved by conventional understanding of facts, evidence and science; and dismissive of the legitimacy of its political opposition.”) and as a consequence “don’t get invited to talk to the leaders of news organizations anymore.” Apparently, there are some truths that the “very serious people” simply aren’t willing to hear.