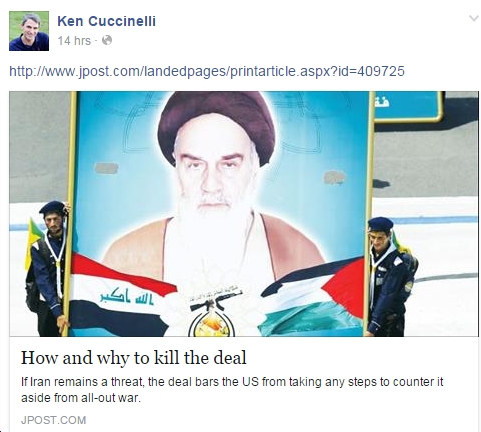 Seriously, is Ken Cuccinelli ever right about anything? Apparently not. Even worse are the ugliness he attracts, and brings out, to his extremist demagoguery. For instance, the top comments on Cooch’s Facebook page to this post are as follows.

*23 likes: “Why would a deal like this include money being given to Iran? Logically, a deal should say that they will not do so and so, period. Money being given to foreign nations, borrowed from China, is the true death of our nation.”

*13 likes: “Some well placed nukes will make for a short war. Sounds harsh but I would rather that than waste our men in the sand over there fighting these lunatics.”

Just another day on Ken Cuccinelli’s Facebook page, basically. Recall that a few weeks ago, we wrote about the top comment on his post on immigration stating, “illegal immigrant families deserve a ride to the border and if they come back they deserve a bullet.” Again,why is it that Cooch attracts despicable people like this? And why is it that Cooch isn’t atypical of many Republicans these days, from Mike Huckabee to Ted Cruz to E.W. Jackson to…we could go on all day? As Andy Schmookler writes in his new book, the “political right – and its political arm, the Republican Party – has become an extraordinarly destructive force in the American body politics,” one that’s “more consistently destructive and dishonest than anything seen before at center state of American politics (except perhaps for the decade leading up to the Civil War.” No argument here; the question is what’s the rest of America doing to stop this lunacy?