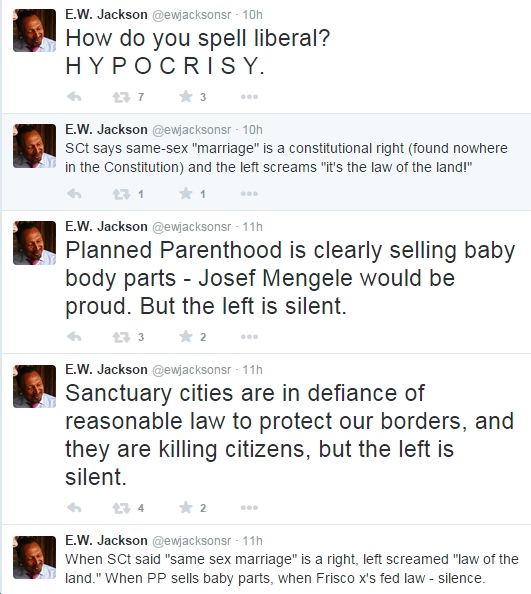 Here are a few national and Virginia news headlines, political and otherwise, for Friday, July 30. And yes, as you can see from his tweets, 2013 Virginia GOP Lt. Gov. nominee E.W. Jackson is STILL off his meds. Sad.

*Planned Parenthood strikes back (It’s about time, given that Planned Parenthood is acting fully within the 1993 law passed overwhelmingly – including “aye” votes by people like Mitch McConnell and many other conservatives – by the Senate and House, making everything the group’s been doing 100% legal. Don’t believe it? See here, here, here and here.)

*A GOP led by Donald Trump will fail, and deserve it

*Krugman: China’s Naked Emperors (“The big news here isn’t about the Chinese economy; it’s about China’s leaders. Forget everything you’ve heard about their brilliance and foresightedness. Judging by their current flailing, they have no clue what they’re doing.”)

*Activists Hanging From A Bridge Force Arctic Drilling Ship To Turn Around (Excellent, we need a lot more non-violent civil disobedience to protect our environment from destruction.)

*After the death of Samuel Dubose, an officer is indicted in Cincinnati (It’s about freakin’ time. Now what about the officers who helped cover up this cold-blooded murder? And what about all the other cases in this country?!?)

*Zimbabwe to U.S.: Extradite dentist over killing of Cecil the lion (Yep, and make an example of this guy to all the other psycho “trophy hunters” out there.)

*Why Cecil Was Such an Important Lion

*More than one reason to sweat (“A hotter planet is almost certainly going to be an especial problem for coastal communities like Hampton Roads, since warmer temperatures mean melting ice, which means rising seas”)

*Wingnuts are gearing up for another government shutdown – this time over Planned Parenthood (When is the corporate media ever going to cover this story accurately, which means no “both sides” false equivalency for starters?)

*Rand Paul attributes Trump’s rise to a ‘loss of sanity’ (As if Rand Paul’s any saner?!? LOL)

*Chesterfield has most Confederate license plates in Virginia (Something most definitely NOT to be proud of.)

*McAuliffe helps launches broader weatherization program for the needy (Much better would be if Dominion made a serious effort towards improving energy efficiency, and if the General Assembly “decoupled” Dominion’s profits from how much power it produces and instead incentivized energy SAVINGS.)