(P.S. For all of you who believe it’s “too early” for the polls to “mean anything,” see The End of the 2016 Election Is Closer Than You Think (“The campaign might be lost even before the GOP picks a nominee.”) – promoted by lowkell)

The following poll results, courtesy of Public Policy Polling, confirm exactly what many of us already thought about Virginia Republicans: they are extremists. Note who they like the most: Scott Walker (+40 points favorable); Marco Rubio (+38); Ben Carson (+36); Mike Huckabee (+30); Ted Cruz (+24); several of whom – Cruz, Carson, Huckabee, possibly Walker as well – are firmly in the “extremist nutjob” category. Meanwhile, who are they NOT as thrilled about? That’s right, the perceived “moderates” (even though they’re “severely conservative” themselves Jeb Bush (barely in positive territory at +4 points) and Chris Christie (under water at negative 19 points. Then there’s former Gov. Jim Gilmore, who gets no love at all from Virginia Republicans, with a negative 15-point net unfavorable rating, and 39% not even sure about who the guy is apparently! Ouch. Anyway, if you ever hear someone in the corporate media or whatever try to claim that Virginia Republicans are not extreme (even after they nominated the “Extreme Team” of Cuccinelli/Jackson/Obenshain for the top three statewide offices in 2013), just point them to this poll. 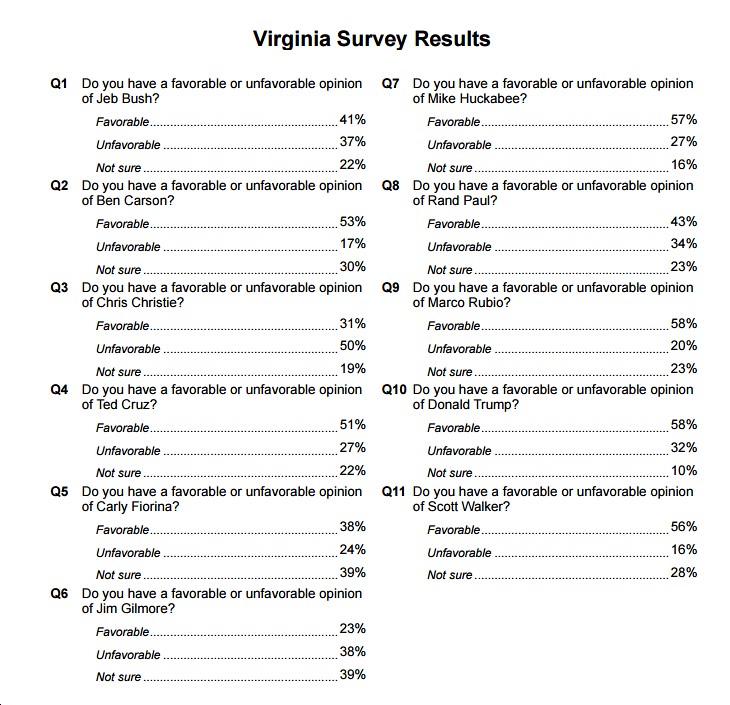