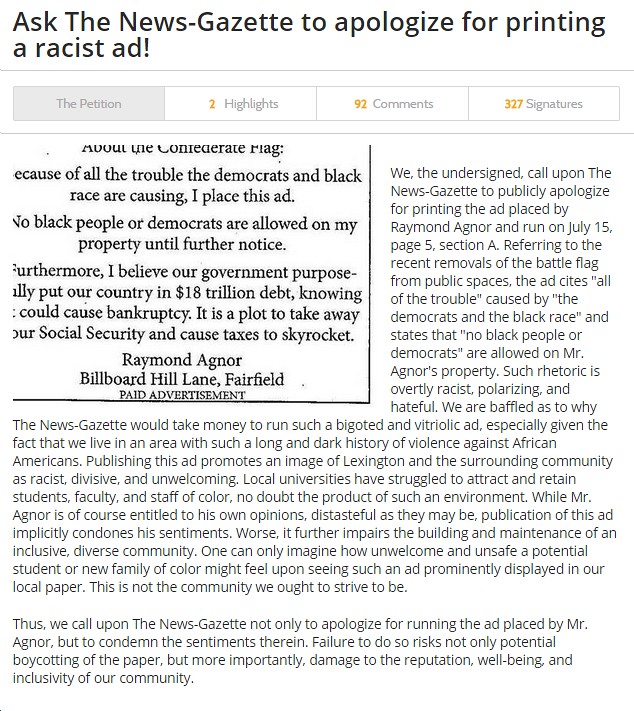 I’m glad to see that the Lexington News-Gazette has now apologized for running a viciously racist ad in its newspaper on July 15, but why was it published in the first place?

About the Confederate flag: Because of all the trouble the democrats [sic] and black races are causing, I place this ad…No black people or democrats are allowed on my property until further notice. Furthermore, I believe our government purposefully put our country in $18 trillion debt, knowing it could cause bankruptcy. It is a plot to take away our Social Security and cause taxes to skyrocket.

Also, the initial “apology” by the newspaper’s editor was muddled and confused, claiming that he published that “ad” because “I felt that it was important for our readers to see that the views expressed in the ad are held by people in our community.” The editor added: “We refrain from publishing things that are libellous, personal attacks or that incite violent or illegal acts. Did the ad meet any of those standards? In my judgement, I did not think so. I admit that others may have decided differently.”

Anyway, in its current edition (not available online without a subscription as far as I can tell), the editor FINALLY gets around to stating the obvious, that Agnor’s viciously racist ad was “repugnant” and a “message of hate” which “violates a basic standard that we’ve always tried to adhere to – that of maintaining a civil level of discourse within these pages.”

Ya think? The question is, why was it so hard to figure that out in the first place? Amazing…

P.S. I love the top-rated comment on Raw Story, which pretty much sums it all up.

We would like to correct you on several mistakes you made in your ad. It isn’t the government who is trying to take away your Social Security and bankrupt the nation. It’s the Republican Party and those of us who vote Republican who are trying to make your life hell. We believe the rich man should have all your Social Security money and we want to bankrupt the nation so we can take away any security net you might need. In other words pull the rug out from underneath you and watch you drown. We tried to bankrupt the nation under St Reagan and Buffoon Bush Jr. We truly feel that you are disposable.

Republicans and those who vote Republican.

Which makes it crucial that Virginia elect *Democrats* on 11/2 https://bluevirginia.us/2021/09/monday-news-un-to-world-leaders-to-curtail-warming-you-must-do-more-pfizer-says-covid-vaccine-safe-and-effective-in-children-ages-5-to-11-democrats-confront-rubiks-cube-on-steroids#comment-5541984636

Stafford Dems-endorsed candidates - if you live in Stafford County, make sure you vote for them! https://bluevirginia.us/2021/09/monday-news-un-to-world-leaders-to-curtail-warming-you-must-do-more-pfizer-says-covid-vaccine-safe-and-effective-in-children-ages-5-to-11-democrats-confront-rubiks-cube-on-steroids#comment-5541974307