Another great – albeit completely insane – quote by “Crazy Cooch” from his Facebook page: “And given the rabid spread of the notion of $15/hour minimum wage laws (coming to the D.C. ballot in 2016), Milton has some things to say (summary: there are NO positive benefits of min wage laws).” Of course, that’s utter idiocy, no truth to it whatsoever, and really a throwback to the late 1800s, back in the good ol’ days (for right wingers like Cooch et al) of sweatshops, no minimum wages, etc, etc. Oh, and for good measure, Cooch has some similarly brain dead advice for Pope Francis: “I think the Pope needs to watch a little Milton Friedman…”

Just remember, Crazy Cooch was nominated not once but twice by Virginia Republicans, first for Attorney General and then for Governor. Also remember, this guy is by far the favorite for their party’s gubernatorial nomination in 2017 as well. It says a great deal about that party – nothing good, though. 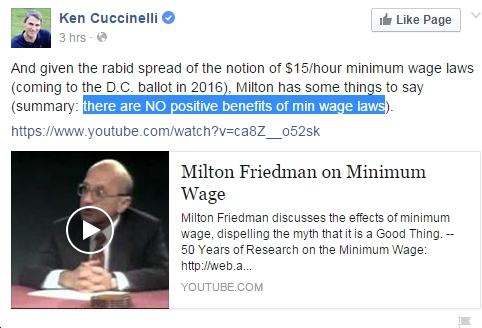 Friday Night Update from the ER in Arlington, VA: “One patient didn’t want the vaccine in her body but then was fine getting monoclonal...